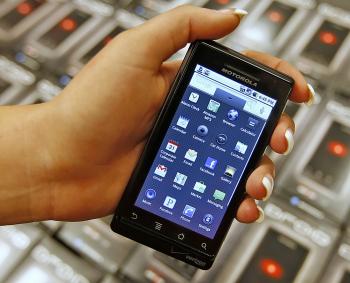 Dubbed as the next “iPhone-killer,” Verizon and Motorola invested untold sums to market the device, which is the first phone to run Google Android 2.0 operating system. The innovative “iDont, DROID Does” ad campaign—which has appeared on TV, in print, and even in Times Square—for the DROID focused on the smartphone’s features that Apple Inc.’s iPhone cannot match.

The DROID is packed to the brim with the latest features, including a 3.7 inch touch screen, a slide-out keyboard, multitasking, and wi-fi connectivity.

"This is an exciting announcement for Verizon Wireless, as the DROID by Motorola is the first device that we are bringing to market under our ground-breaking strategic partnership with Google," said John Stratton, executive vice president and chief marketing officer for Verizon Wireless in a statement. "DROID by Motorola gives customers a lifestyle device with access to more than 12,000 applications that will help them stay in touch, up to date and entertained, using the best 3G network in the country."

The company desperately needs an entertainment device to compete with AT&T. While Android’s 12,000 applications pales in comparison to the more than 150,000 titles available in the iPhone App Store, analysts believe Google’s Android—with third-party developer and manufacturer support—could achieve the functionality and usability of Apple’s iPhone OS.

More than two years after its release, competitors are still searching for an answer for Apple’s iPhone.

This time, three companies have teamed up to bring the latest iPhone rival to market—if you don’t count LucasArts, which licensed the “DROID” name. Google Inc. partnered with numerous cell phone makers to release handsets with its Android operating system. But so far, T-Mobile USA—the smallest of the U.S. cell carriers—has been the only provider to release phones running the OS.

In a recent SEC filing, Google admitted, “As we have limited experience to date in operating versions of our products and services, including Google Mobile and Android… we will fail to capture a significant share of an increasingly important portion of the market for online services, which could adversely affect our business.”

But for Verizon Wireless and Motorola, the stakes are much higher.

Motorola has not developed a popular mobile phone since its iconic RAZR in 2004. Since then, the company has become an afterthought—it laid off 7,500 workers last year, and in 2008, executive Michael Fenger left the company and joined Apple to become vice president of iPhone sales.

Needless to say, much of Motorola’s future hinges on how well the Droid sells, and how well the company continues to develop the Android platform.

Verizon is a joint venture between Verizon Communications Inc. and U.K.’s Vodafone PLC.