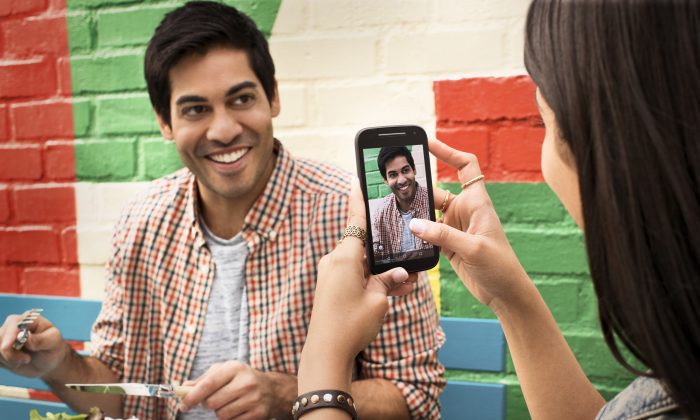 A woman takes a photo of a man with the new Moto E. The second generation phone was released Feb. 25, 2015 world-wide. (Courtesy of Motorola)
Business & Markets

The box revealed an affordable phone, selling at $149 for 4G and $119 for 3G, that came with several features added by popular demand, according to the engineers.

Some of the features include a battery that lasts all day on a single charge, a new basic quality front-facing camera, and a 4.5-inch qHD display. It also has a curved back and an ergonomic design that can be purchased with either black or white phone cases, or choose from any of six colorful cases sold in stores. Consumers can choose to sheath their phones in one of five colors of grip shells that offer better grip.

The second-generation phone comes with 4GLTE for the first time and uses Android Lollipop, the newest version of Android, ensuring users a faster experience.

While many of these features, such as a front-facing camera for selfies and a durable battery, can be found in other brands of smartphones, the chief difference that Motorola is touting is Moto E’s affordability.

The buttons have texture and there’s an elegant spin finish around the camera hole, according to industrial engineer Sangsoo Park, which is normally seen in more expensive devices.

Moto E also has some of the old features it had last year, such as a sleeping mode that keeps the phone quiet and dark for as many hours as the user sets. The new phone also brings back Quick Capture, which the older Moto X phone had, where users can twist their wrists to launch the camera and twist again to take a selfie. Users can also view their notifications by nudging their phones, or use Google Voice to send emails and get driving directions.

The phone hit stores in 40 countries across the globe Wednesday.