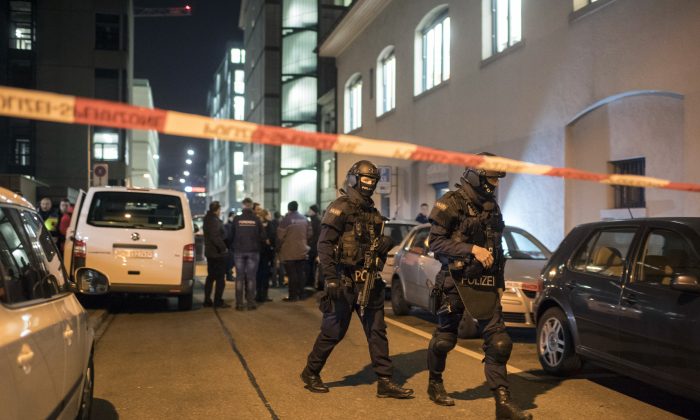 Special Unit Policemen secure the area in front of the Islamic center, in Zurich on Dec. 19, 2016. (Ennio Leanza/Keystone via AP)
International

ZURICH—Swiss police have found no radical Islamist or far-right motives by a gunman who killed himself after carrying out a shooting spree at Zurich mosque that wounded three worshippers, a top police official said Tuesday.

Authorities are still investigating the possible motive of the 24-year-old Swiss citizen of Ghanaian origin with a penchant for the occult who carried out Monday’s shootings in Switzerland’s largest city.

The incident had stirred concerns about possible extremist violence in the mostly peaceful Alpine country that, like others in mostly Christian Europe, has been wrestling with its relationship to its Muslim communities.

The suspect, who was not identified by name but had a criminal record for a bike theft years ago, had only days earlier repeatedly stabbed and killed an acquaintance of South American origin with whom he had been arguing.

“There’s no indication of any kind of terrorist connection to (the radical Islamic State group), or an Islamic radicalization of the suspect,” Zurich state criminal police chief Christiane Lentjes Meili said of the mosque shootings.

She said no links to any far-right movements were found either.

Turkish Official: Envoy’s Killer Unlikely to Have Been Alone

A Zurich city police spokesman said Monday that the gunman, dressed in dark clothes, stormed the mosque’s prayer hall and opened fire on worshippers, wounding three people before fleeing. The mosque is frequented by Somali migrants.

Zurich police on Tuesday suspended the hunt for the suspected gunman after a body was found in the vicinity, which turned out to be that of the assailant.

“It became quickly clear that the person killed himself,” Lentjes Meili said, without elaborating.