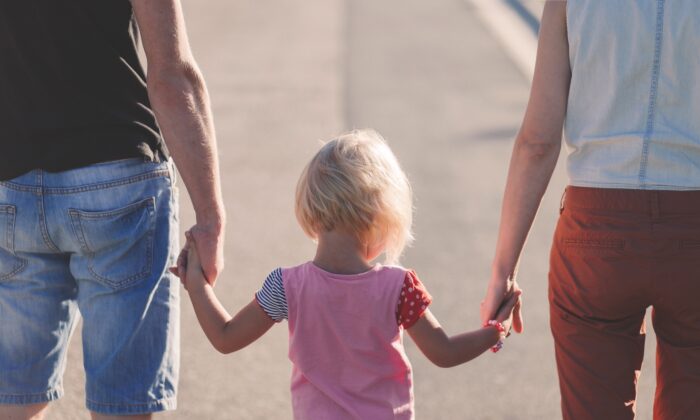 A photo of a child holding hands with two adults. (Pexels from Pixabay)
Australia

‘Mothers of Sons’ Cry Out for Truth, Justice

Media silent on suffering due to political correctness
By Daniel Y. Teng

A group of Australian mothers, upset over ugly custody battles, have banded together to raise awareness of the growing abuse of the family court system by women against men.

Mothers of Sons, started by well known Australian feminist, media commentator, and now men’s rights advocate, Bettina Arndt, said she started the initiative because she believed it would be “comforting” for women with similar experiences to share their stories.

“I’ve had people of all sorts contacting me about these issues to do with injustice against men, and many, many of those are women, including mothers who have had sons who’ve suffered dreadful ordeals, particularly in the criminal justice and family law systems,” she told The Epoch Times.

Arndt said she thought it would be a good idea to let the mothers tell their stories in the hope that maybe the mainstream media would take notice “because we’re all supposed to believe women, aren’t we?” she said.

The group’s website features several testimonials, including one from Michelle Jones, whose son was falsely accused of rape and domestic violence (police placed 32 charges against him) and had to spend several months in prison before his ex-wife’s story was unravelled by authorities.

“We never had any doubt that Daniel was telling the truth. And to see a son being accused of such violent and racist crimes is absolutely soul destroying as a mother,” she said in a video on the Mothers of Sons website. The family spent A$250,000 (US $181,000) in the legal fight for their son.

Another case saw a mother claimed that her son, a doctor, was falsely accused of domestic violence and had been fighting an ongoing custody battle for her grandson.

“I believe in the past four years my son has spent close to $400,000 in legal fees and still counting. He now takes medications for anxiety and consults a psychologist,” Vimala said. “I believe there are thousands of mothers like me who shed tears and that many lives are lost in the process. I am helpless and, at 71 years of age, I can only pray God hears our prayers and justice is served to our sons.”

Australia’s family court system has undergone frequent repair jobs since its founding in the 1970s. In fact, over the past two decades, the court has been the subject of 31 reports and five parliamentary inquiries, with the most recent concluding in June this year.

Lawyers are unanimous in their assessment of the system, with former President of the Law Council of Australia, Arthur Morris S.C., saying, “There is no doubt Australia’s family law system is broken. Delay, cost, and confusion continue to let down families and children in need.”

Experts believe, however, that the system’s struggles stem from the difficulties of applying rigid legal frameworks to regulate inherently complex, amorphous, and emotional disputes.

“A lot of the time, they’re not suing someone for breach of contract or some legal, contractual duty. There’s a moral contract; there’s a mum and dad contract; there’s a contract when you got married. There was a commitment for life which is no longer connected, so now you got all this property to sort out, and there’s a lot of psychological evaluation,” he said.

Augusto Zimmermann, a former member of the Law Reform Commission of Western Australia, said the system was open to abuse by parties who wanted the “marriage the least.”

“Many cases of domestic violence have ended up in courts where these allegations have been disproved, and sometimes many years after the accused found themselves evicted from their homes and alienated from their children,” he told The Epoch Times.

Men No Longer Given A Place in Media, Politics

Arndt asserts that the dominant narrative in Australian politics and media is on women’s rights, meaning little airtime is available for men’s issues.

“One story we presented was of a woman whose granddaughter, a toddler, was murdered by her mother when she lost custody to her husband,” she said, referring to the story of Jo Thomson-Jones, whose son, Nathan, fought a long-running custody battle for his daughter Iyla.

“This is a woman telling the story of a shocking family tragedy,” Arndt said. “That is a story that would normally attract widespread interest. But in this case, it’s a woman who’s the villain of the piece, killing a tiny child and destroying a man’s family. That challenges the feminist narrative—so the media takes no notice.”

Arndt years of work in promoting men’s issues has also triggered calls for her to be “cancelled” by other feminist groups despite her background as a feminist in Australia.

In 2020, she was appointed to receive the Member of the Order of Australia for “significant service” in the field of social commentary and promoting gender equity. However, she was targeted by feminist groups, claiming she had “minimised violence” towards women after interviewing Nicolaas Bester.

Bester was convicted of raping and abusing the current Australian of the Year, and prominent Tasmanian sexual assault victims advocate and originator of the #LetHerSpeak campaign, Grace Tame, when she was a child.

Bester was 58 years old and Tame’s teacher at the time of the assaults.

Arndt conducted the interview to highlight the vigilantism directed towards Bester after he left prison, which one Supreme Court judge said was “regrettable.”

Arndt said she thought that feminism had “gone off the rails” and was alienating people.

“There are women across the world who love men and want to see men receive fair treatment,” she said. “Our world is no longer about equality for men and women but about giving advantage to women at the expense of men, and I think there’s no question the majority of women object to that.”

She pointed to the example of Erin Pizzey, the woman who set up the first women’s refuge in the United Kingdom but then received death threats and boycotts from militant feminists after she told the truth about domestic violence perpetrated by either women and men.

“Pizzey is a woman who grew up with a violent mother. So she wasn’t surprised to discover when she was running her refuges, that many of the women coming in were violent towards other women and towards their children, and she started to speak out about that,” Arndt said.

She added that modern feminists had successfully leveraged issues that could gain traction politically and in the media.

Eric Louw, a retired professor in political communication and expert in postmodern theories, says feminist activists were “extraordinarily successful” at spreading their ideas.

“Feminist ideas are now effectively no longer open to critical scrutiny. They are just taken as true and ‘good.’ When an overwhelming majority of journalists in a society take on an idea as ‘given,’ as ‘true,’ and as ‘good’ then you have an ideology,” he told The Epoch Times.

“Once you have such a powerful ideology in place, politicians are going to learn to be very careful. Any politician stepping outside the bounds of what feminist ideology argues is ‘true’ is going to invite serious attack from the mainstream journalist community,” he added.