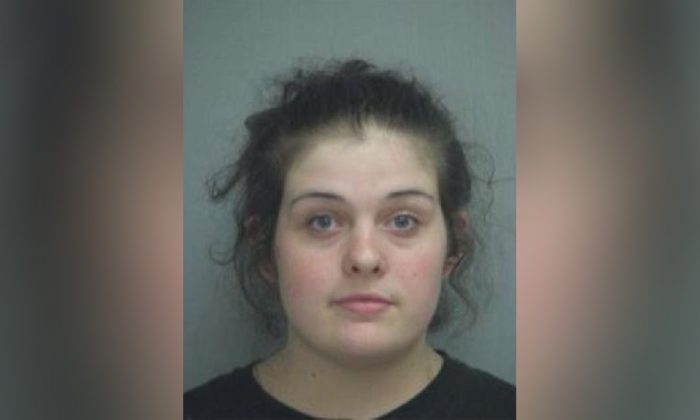 A Louisiana woman has been arrested and charged with second-degree murder in the death of her five-year-old daughter.

According to a police report, on the afternoon of Wednesday, July 17, officers responded to a call from Christus St. Francis Cabrini Hospital after a woman brought the dead body of her child to the hospital, reported KALB.

Hospital staff told police that the girl was dead on arrival and that 24-year-old Jasmine Anderson claimed that her daughter, 5-year-old Audrey Chelette, died as a result of a car crash that had happened earlier that day. The Alexandria woman reportedly said that “Chelette’s head and neck had struck the front passenger’s side window.”

Police then took photos of the 2001 Dodge that Anderson had been driving and later stated that the injuries suffered by the young child did “not seem consistent with what would occur during a crash,” reported the NBC affiliate.

During the investigation at the place of the alleged crash, police determined that evidence there did not match he mother’s story. “At approximately 4 p.m. July 18, APD Traffic Officers located the scene where the incident took place and evidence indicated it was not a vehicle crash as described by Anderson,” the Alexandria Police Department said in a news release.

“Detectives and Crime Scene Investigators responded and continued the investigation. An autopsy, performed on July 18, confirmed the child died from an injury to her neck,” the statement read.

Anderson was booked into the Avoyelles Parish Sheriff’s Office on Tuesday, July 23, she was then taken to the station for questioning. She will held at the Rapids Parish jail, reported KALB.

“I want to thank all of our officers who worked so hard to investigate this case,” Chief Jerrod King told reporters.

“The wrongful death of a child is a horrible thing to see, and these men and women have maintained their professionalism and pursued the case with their customary diligence.

“I want to specifically commend Sergeant Butler and Corporal Daigre of our Traffic Division, who spent hours painstakingly recreating the suspect’s movements and discovering the location of the crime,” Chief King added.

“I also want to thank District Attorney Phillip Terrell, with whom we’ve been working on this case since the beginning to ensure a complete and thorough investigation.”

It was later revealed that on April 23, 2019, Anderson’s four-year-old son had also passed away. Police were called to a home on Princeton street in Alexandria where they found the young boy unresponsive.

Anderson told police at the time that “she woke up and went to the bathroom, and that is when she observed (name redacted) on the floor not breathing,” KALB reported. The boy had apparently choked on a coke cap. He died two days later in hospital.

The father of the two children, Christopher Dawayne Chelette, also passed away in 2016 at the age of 20, reported NBC News.

When asked whether the previous deaths will be re-examined, police said, “We are aware of the previous incident, however, it would be premature to link this case to previous cases while it is still under investigation.”

The police department also said “the release of information must be carefully restricted due to the sensitive nature of the crime.”