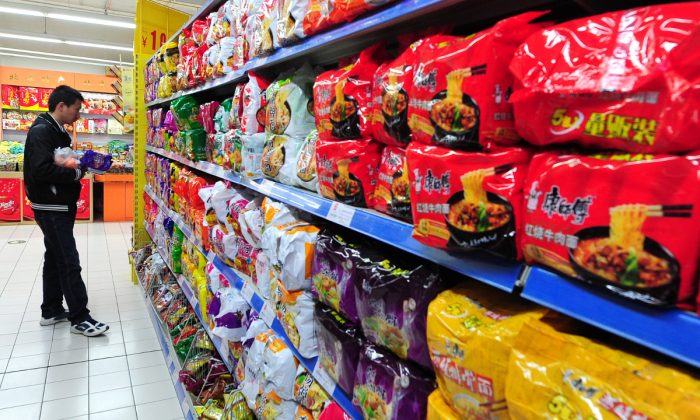 A young boy was brought to tears after a mother prepared him a bag of instant noodles that had large pieces of beef displayed on the packaging, but none in the finished product, according to a video from Chinese online media outlet Pencil Videos.

The video was shared on Chinese social media and reported by Pencil Videos on July 31. The report did not include where or when in China the mother captured the boy’s reaction.

Social media users joked about the child’s despair by bringing up dishes with certain names that don’t actually include the food in their name.

“It’s just called teriyaki beef noodles,” the mother says in the video. “If it doesn’t have meat, what can I do about it?”

The boy breaks into tears while pointing to the picture on the empty packaging. “Then why does it show there is meat on here?”

“I don’t know why they put meat on there,” the mom answers him. She explains to him that it’s just a picture on the packaging that has meat, but not actually inside the meal.

That doesn’t comfort her son.

“This isn’t happening!” the boy shouts as he turns and half runs, half stomps away from the table into the family room. “I can’t believe it!”

The mother then continues recording moments later when the boy is less angry, but still as tearful. “Why is there meat on the picture? But why is there none here?” the boy chokes out in a strained voice in the video, his face in a grimace as he holds the packaging, ignoring the bowl of noodles in front of him.

“Why does it have meat?” he says as he points to the package, asking his mom once more. He repeats again that there is none for him, despite the image on the package.

The mom appears to be losing interest.

“Where is a picture of meat?” she responds to his unending questions. “They printed it right here!” the boy shouts to his mom, losing his temper once more, covering his face with the empty wrapper. “What’s wrong with my eyes?!”

Moments later, the boy attempts to begin eating, chopsticks in hand, but with a painful expression on his face as he moans and repeatedly says “Beef, beef,” in the video.

Social media users on Weibo, China’s version of Twitter, joked about other dishes lacking ingredients in their name. One common response was “There is no wife in ‘wife bread,'” made by multiple users. This bread is sometimes called a “sweetheart cake,” and is similar to a Western tart.