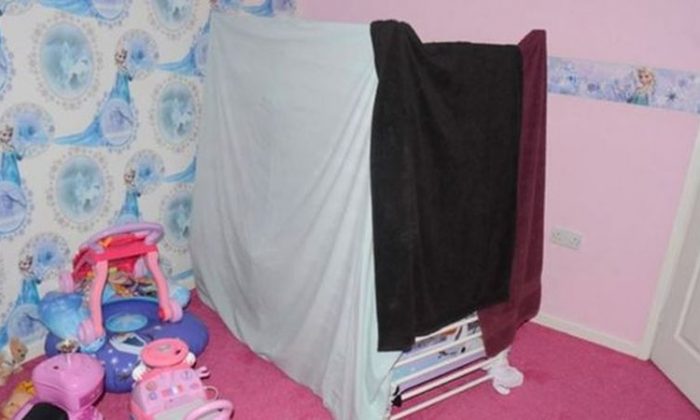 A judge called the bed that Ellie-May died in on March 23, 2017, "quite literally a death trap." (Lancashire Constabulary)
UK

A woman and her ex who strapped a 19-month-old girl down in a “cage bed” have been each sentenced to 10 years in prison, it was reported.

The toddler, Ellie-May Minshull-Coyle, died after she was restrained in her bed in Preston, in northwest England, in an incident described as “monstrous,” the BBC reported.

Lauren Coyle, 19, and stepfather Reece Hitchcott, 20, were convicted of causing or allowing the girl’s death.

An autopsy in the March 2017 found her death was caused by “forcible restraint by ligatures in a face-down position complicated by hyperthermia,” the London Evening Standard reported.

The cot she was sleeping in was made into a “cage,” and its sides were tied together.

“The bed you both created and used, night after night, was quite literally a death trap,” Judge Justice Dove said in the report.

The judge continued: “On the night of March 22 and March 23, 2017, undoubtedly in escalating distress and agony, Ellie-May Minshull Coyle succumbed to asphyxiation while she was forcibly restrained in the cage.” He explained to them: “All the positive energy and joy, which she had brought into the world was extinguished on March 23 and it was extinguished by you both.

The couple said they had difficulties getting the girl to sleep. They received advice from the girl’s grandparents, but they reportedly ignored it, the Standard reported.

The two converted a “Frozen” movie-themed bed into a “cage,” placing sheets over the sides to prevent the girl from seeing outside, according to the news outlet. They also blocked out the windows in the room where the bed was located.

The judge said the couple was aware of the risks posed by the makeshift bed. “I accept Ellie-May’s death has had a clear and significant impact on you both but in circumstances where you both continue to maintain your denials of involvement there can only be limited signs of remorse,” he added.

“Every day me and my mum think about Ellie and really miss her, we just wish we could give her a big hug and it breaks our hearts deeply,” he stated. “Now I can’t be a dad to her no more, it destroys me inside,” the BBC reported.

John Jones, a lawyer representing Coyle, said the mother had been subjected to a social media “hate campaign” and was “abandoned” by her parents during the trial, the Standard reported.

But Brett Gerrity, from the Crown Prosecution Service, told Sky News in early November, “This is a tragic case in which a young and innocent child was treated in the worst possible way by those who should have kept her safe from harm.”

He added: “During the trial, the prosecution proved that, by restraining Ellie-May in her bed, or knowing that she had been restrained in such a way, Lauren Coyle and Reece Hitchcott wilfully contributed to or directly caused her untimely death.”

And Detective Chief Inspector Zoe Russo described the investigation as “the most distressing” one she’s had to deal with.

“To think of the suffering that this little girl was put through by those people that should have loved, cared for, and protected her is heartbreaking,” she told Sky News. “This was an entirely unnecessary, pointless, and avoidable death of a child.”