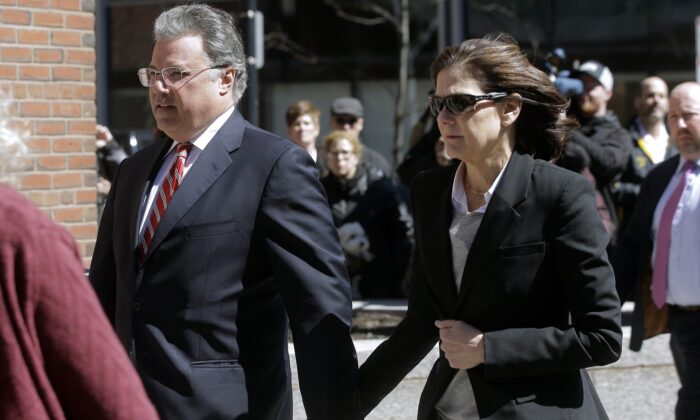 A California woman was sentenced on March 31 to seven months in prison for paying bribes to rig her two daughters’ college admissions exams and get one of them into Georgetown University as a fake tennis recruit.

In an unusual hearing held via videoconference due to the CCP (Chinese Communist Party) virus pandemic, the judge rejected Elizabeth Henriquez’s bid to avoid prison because of the public health crisis but is allowing her to remain free until at least June 30 in the hopes that the outbreak will have diminished by then.

“I have every hope that the coronavirus crisis will abate in a matter of months and that Ms. Henriquez will be able to serve her sentence safely and rebuild her life,” U.S. District Judge Nathaniel Gorton said.

Henriquez and her husband were charged with paying $400,000 in bribes to get their oldest daughter into Georgetown as a bogus tennis recruit in 2016. They also paid bribes to have someone cheat on their daughters’ college entrance exams, authorities said.

In one instance, the purported proctor sat next to her daughter while she took a test and fed her the answers and then “gloated” with Henriquez and the teen about how they had cheated and gotten away with it, authorities said.

“This was a long-term scheme where fraud replaced truth in the admissions process for both of her kids,” Assistant U.S. Attorney Eric Rosen said.

Her husband, Manuel Henriquez, is the founder and former CEO of Hercules Capital, a finance firm in Palo Alto, California. He is scheduled to be sentenced April 8.

Her lawyers had urged the judge to give her home confinement, citing a memo written by Attorney General William Barr who said some nonviolent inmates who are particularly at risk to the CCP virus may be safer at home than behind bars.

“I feel so ashamed and I promise to spend the rest of my life trying to repair the harm caused by my immoral actions,” Henriquez told the judge.

Henriquez was sentenced via videoconference to keep people from gathering at the federal courthouse in Boston amid the pandemic. The judge talked to Henriquez and lawyers over video chat while news media and other members of the public listened on the phone.

The Boston court and halls of justice across the country have delayed jury trials and moved to video and telephone hearings to keep the criminal justice system moving while people are hunkered in their homes.

Prosecutors had argued in court documents that she deserved more than two years behind bars.

Gorton ordered Henriquez to begin serving her prison sentence on June 30 but said he would consider a request to push that back further if necessary.

She is among nearly two dozen prominent parents who have pleaded guilty in a case dubbed “Operation Varsity Blues.”

Others who have admitted to charges include “Desperate Housewives” actress Felicity Huffman, who was sentenced to two weeks in prison for paying $15,000 to rig her daughter’s entrance exam.

Eight parents, including “Full House” actress Lori Loughlin and her fashion designer husband, Mossimo Giannulli, are scheduled to go to trial in October.

Those parents asked the judge last week to toss the charges, accusing prosecutors of withholding evidence that would support their claims of innocence.