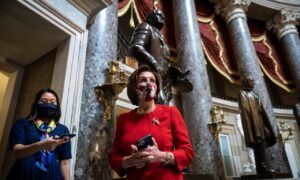 Pelosi: Omar Is a ‘Valued Member’ of the Democrat Caucus—‘We Did Not Rebuke Her’
0
Share Now
TelegramFacebookTweetEmailTellMeWeReddit
Copy Link
US

The body of a Michigan car crash victim was not discovered until many hours after the initial investigation, police said.

The body of Amber Prowant, 22, was found by a passerby pinned under her jeep in the woods a “significant distance” from the apparent crash site, MLive reported, citing Lt. Matt Kanitz of the Michigan State Police.

Her body wasn’t found for nine hours, the report said. Officials initially received a call at around 11 p.m. on Thursday about the crash.

First responders and police initially thought it was a single-vehicle crash around M-20 west of Hesperia, according to the New York Post.

They found another car overturned in a ditch along with a male driver, who is around 30 years old, who had suffered minor injuries. He was transported to a nearby hospital.

The male driver did not mention a second vehicle being involved the crash, Kanitz told MLive. Other media reports said that he was from Arizona and is 28 years old.

“It sounded like a pretty traumatic crash,” Kanitz said. “It’s certainly a tragedy—a young woman losing her life like that.”

According to Michigan State Police Sgt. Adam Clement, the male driver had experienced a medical emergency related to his diabetes.

At 8:30 a.m. the next day, local man Brian McCallum drove through the area around the accident when he noticed skid marks on the road. He followed the skid marks and found Prowant’s body, the Oceana County Press reported.

“It may have been too late for her anyway,” her cousin, Robert Smith, said. “It wasn’t anything done intentionally, but the troopers did miss it,” added Clement. Smith said he works with McCallum.

Prowant wasn’t wearing her seat belt, police said. She was reportedly ejected from the vehicle, which was “far out into the woods,” Clement said. “It was not apparent from the road.”

She’s survived by her children, Ethan and Daytona Lattin, and her boyfriend, Adam Lattin, according to an obituary.