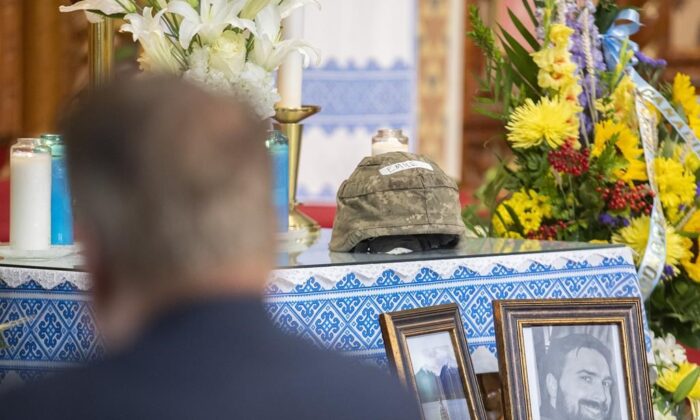 People attend a service organized by the Ukrainian Congress of Canada in memory of Emile-Antoine Roy-Sirois in Montreal, on Aug. 26, 2022. (The Canadian Press/Graham Hughes)
Canada

MONTREAL — The mother of Quebec man who was killed last month in Ukraine fighting Russian forces told a memorial service Friday that her son’s “courage and big heart” made him a hero.

Marie−France Sirois told a service in Montreal her son Émile−Antoine Roy−Sirois and three other foreign volunteer soldiers died together under bombardment in Ukraine’s Donbas region on July 18.

“They died as heroes, in supporting each other to the end and sharing the same convictions,” Sirois told the crowd gathered at the Ukrainian Parish of the Assumption of the Blessed Virgin Mary in Montreal.

“The willingness to protect women and children and denounce injustice were part of my son’s DNA, I’m not the first to say it.”

Sirois described her 31−year−old son as a kind, funny and generous person who felt “a call he couldn’t ignore” to join the forces fighting in Ukraine. She described him as a kind of “philosopher knight” with chivalric values reminiscent of another time.

“Émile wanted to make a difference and I believe he succeeded,” she said.

“He is a hero for his courage and big heart, but what comforts me the most was I know that he was happy to the end, in acting to the height of his convictions.”

A silver urn and a military helmet bearing the name “Émile” sat on a table at the front of the church. Two framed portraits also sat on the table, which was flanked by bright yellow sunflowers.

Sirois received a standing ovation from the crowd gathered in the pews, many of whom wore traditional Ukrainian clothing or carried Quebec, Canadian or Ukrainian flags.

Eugene Czolij, the honorary consul of Ukraine in Montreal, told the crowd Roy−Sirois died a hero after trying to rescue a wounded colleague.

“Know that heroes like your son Émile−Antoine will never die, because their memories remains eternal,” he told Roy−Sirois’ mother and other family members.

He said in an interview the service was organized so that Roy−Sirois’ family would feel the gratitude of Ukrainians living in Montreal.

Czolij said his organization helped to repatriate the fighter’s remains from Ukraine in time for the service.

Nineteen−year−old Arsenii Pivtorak said ahead of the service that he hadn’t known Roy−Sirois, but wanted to thank him for defending Ukraine. Pivtorak said he had also wanted to go fight alongside his cousin and other family members, but wasn’t been able to due to work and study commitments.

“To see this from a foreigner who had no connections to Ukraine, sacrificing his life for my people, for freedom, the least I could do is come here,” he said outside the church.

Michael Shwec, the head of the Quebec branch of the Ukrainian Canadian Congress, said Roy−Sirois would go down in history as a “hero of Ukraine.”

“We have a saying in Ukrainian that says, heroes never die,” he said. “So his name, his legacy will go down in history.”

Shwec said it’s important for Canada to keep supporting Ukraine as the war shifts from a sprint to a marathon, but individual volunteers are not necessarily the best way.

“Ukraine is not asking for foreign soldiers,” he said. “What they’re asking for is arms, and that’s what we continue to ask the government (for).”

Czolij said he’s aware of other Canadians fighting in Ukraine, but he doesn’t know how many have joined the country’s forces against Russia.