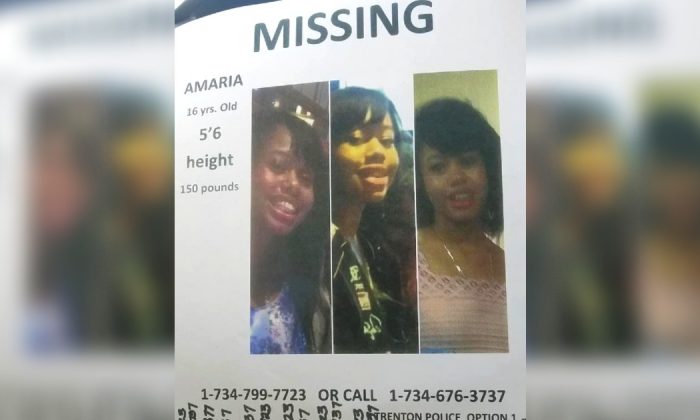 A missing posting seeking for Amaria Hall, a 16-year-old who was last seen July 17, 2019. (Latisha Gyant Counts)
Crime and Incidents

Mother of Missing Michigan Teen, 16, Fears She May Be Victim of Human Trafficking

A mother from Trenton, Michigan is asking the public for help in locating her 16-year-old daughter, who has been missing since July 7 and fears she may be a victim of human trafficking.

Amaria Hall, 16, was last seen in Trenton in the early hours of July 7 when she left a note for her mother saying she was running away, asking her not to try to look for her, reported The News-Herald.

The African American teen is 5 feet 6 inches tall, weighs around 150 pounds and is “very emotional” as she has suffered from anxiety and depression in recent years, her mother, April Hall, told police officers.

The night before she disappeared, Hall said her daughter became frustrated as she couldn’t find their computer’s adapter for her to access the internet. Amaria then asked Hall if she could use her hotspot to get internet access.

But at around 3 a.m. on July 7, Hall said she heard their sliding door open, and found her teen daughter had left with a bag of clothes and sandals. However, it is not known what she was wearing when she disappeared.

Trenton police have said they are “very concerned” about the teen’s disappearance. Steven Voss, director of police and fire services, told The News-Herald they are also concerned because Amaria did not take her medication with her, which included an inhaler.

Hall fears her daughter has become a victim of human trafficking and believes her disappearance could be linked to a man she met online, according to The News-Herald.

The man, who Hall calls a “Romeo pimp” allegedly sent Amaria a package recently, and she believes he is his 40’s and “brainwashed” her daughter over the past few months.

“That’s the guy who takes his time romancing you,” the teen’s mother said. “She probably thinks he is her boyfriend. He’s brainwashed her and turned her against me.”

Hall told WWJ that the pair met on social media and believes he was “posing as a friend.”

The worried mother told the WWJ she is concerned about Amaria’s mental health, as her grandfather passed away recently.

“I want to tell people depression is real,” Hall told The News-Herald. “It will change your child. Amaria acts like she’s about 12 or 10. She’s quiet and has a baby voice.”

Hall added that without her medication, Amaria will become extremely anxious.

Amaria was registered as a missing person in the police database. There have been several reported sightings of the teen east of Detroit, and out of Warren, according to Voss.

“I pray every day that somebody is going to see her. She was the most beautiful child in the world — smart, talented,” she said. “For all of this to happen to her, I want her to come home whether she wants to or not.”

“Your family loves you, and everyone is here to help you start anew—no questions asked,” she said in a message to her daughter.

Amaria’s disappearance is under investigation by the Trenton Police Department. Anyone with information on her whereabouts is asked to call Trenton police at 734-676-3737 or the Regional Director D. Smith at 478-550-0148 or DSmithcfsi@gmail.com.