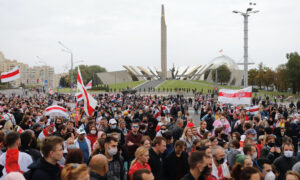 Tens of Thousands Rally Against Belarus President in 'People's Inauguration'
0 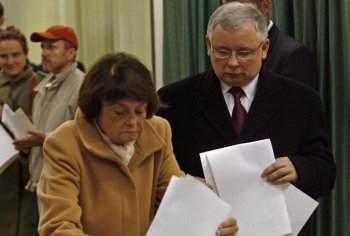 Polish Prime Minister Jaroslaw Kaczynski watches and his mother Jadwiga cast her ballot at a polling station in Warsaw for the general elections 21 October 2007. Jaroslaw told his mother Wedneday that his twin President Lech Kaczynski, was killed in a pla (Janek Skarzynski/Getty Images)
Europe

Print
The 83-year-old mother of the late Polish President Lech Kaczynski finally learned of her son’s death on Wednesday, Polish Mother’s Day, more than six weeks after his plane crashed in Smolensk, Russia.

Jadwiga Kaczynski had been gravely ill and doctors recommended that she not be told of the tragedy that killed her son, his wife, and 94 others, until she was better.

Jaroslaw Kaczynski, the deceased president’s identical twin brother, broke the news to his mother.
Jaroslaw is unmarried and spends much of his time caring for his mother.

"He found himself in a role that would be difficult for any of us to imagine," Polish politician Elzbieta Jakubiak, told TVN24.

"I empathize with him about this day [that he revealed the facts to his mother]. But at the same time, I think it is a source of relief for him, and relief for his mother, who deserves to know about it," said Jakubiak.

Jaroslaw is running for president in national elections scheduled for June 20. Jakubiak, of the Law & Justice Party, is part of the team supporting Kaczynski's presidential bid.

The plane carrying the Polish delegation was on its way to commemorate the 70th anniversary of the Katyn massacre, where about 22,000 members of Poland's elite were killed by Soviet security forces.