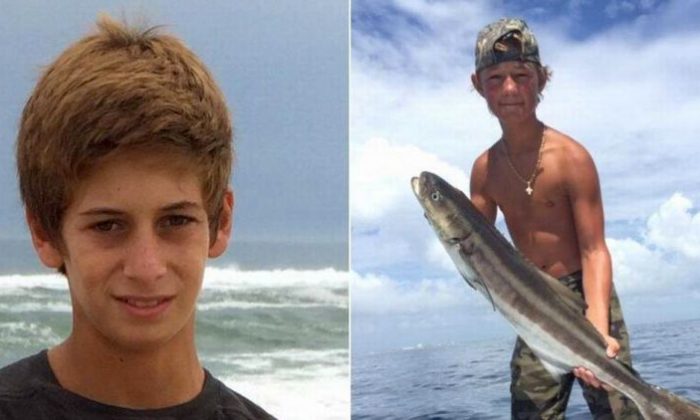 Two years ago, two Florida teens went missing out at sea during a fishing trip.

Now, the mother of one of the boys, Perry Cohen, is suing the family of the other teen, Austin Stephanos, in a wrongful death lawsuit, WPTV reported. They were last seen alive on July 24, 2015, and left the Jupiter Inlet in Florida.

“When she said goodbye with a kiss and a tight hug, she never imagined she would never see him again,” stated Pamela Cohen’s attorney, Guy Rubin. “Pamela knew Austin’s mother, Carly Black, and believed Austin’s family would honor her rules and directions, and use reasonable judgment as Perry’s trusted custodians.”

The suit also names co-plaintiff John Eric Romano, who is a personal representative of Perry’s estate, according to People magazine. The defendants are Austin’s parents, Carly Black and Blu Stephanos, as well as Richard Kuntz, his grandfather.

The counts include negligent entrustment, breach of custodian and parental trust, negligent supervision, and negligent undertaking of search.

A Florida Department of Law Enforcement investigation found Black showed an “egregious lack of judgement and failure to execute due care” when allowing the two boys to go offshore in a 18-foot-long SeaCraft boat—owned by Austin—knowing it was poorly equipped and lacked basic safety and communications devices.

Cohen’s attorney said the lawsuit was filed against people who contributed to the boy’s presumed death and disappearance. “Civil action carries with it the opportunity to find the truth and let the sword of justice swing without favor, sympathy, or prejudice. That is the American way,” Rubin said, according to WPTV.

Rubin claimed that Austin’s parents knew he was taking Perry out to sea even though they knew Perry wasn’t allowed to go without his parents’ permission. “All of this just didn’t add up. What were they trying to hide or protect?” attorney Rubin asked.

“If he was not permitted to travel into the ocean, against his mother’s explicit wishes, and despite promises she received from Defendants that they would honor her wishes, Perry would be alive today,” the lawsuit reads, according to the Miami Herald.

The suit, meanwhile, claims that Kuntz knew the boys were planning to go deep-sea fishing and lent them $100 to buy fuel.

Before Pamela Cohen filed the suit, Black attempted to block the litigation in court, but a federal judge ruled the Cohens could proceed.

“As a result of the pending and prospective civil litigation involving this tragic accident, Carly, and her representatives, will not, at the present time, be granting interviews or giving statements concerning the heartbreaking circumstances of the loss of her son, Austin, and his friend, Perry,” he said, according to the Sun-Sentinel.