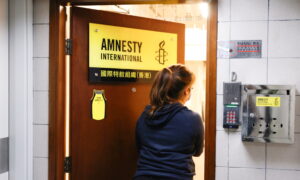 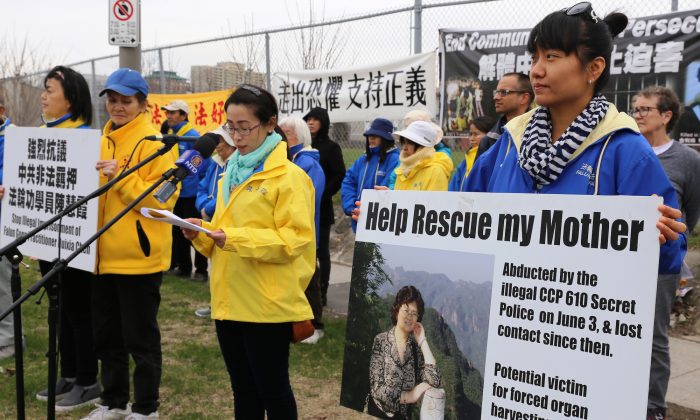 Hongyan Lu speaks at a rally in front of the Chinese Embassy in Ottawa seeking the release of her mother, Huixia Chen, a Falun Dafa prisoner of conscience in China, on April 25, 2017. (Donna He/The Epoch Times)
China Human Rights

Mother of Canadian Sentenced in China Because of Her Belief

A Canadian woman whose mother is illegally detained in China because of her faith says her mother has been sentenced to 3.5 years in prison.

Huixia Chen was arrested on June 3, 2016, for her practice of Falun Dafa, a traditional Chinese spiritual discipline based on the principles of truthfulness, compassion, and tolerance that has been heavily persecuted by the Chinese communist regime since 1999.

Chen’s daughter, Hongyan Lu, who is a Canadian citizen, said she learned through her aunt that Chen was sentenced in early September.

“I think the lawyer was under some kind of pressure, so he couldn’t tell me earlier,” Lu said.

According to Amnesty International, which has an urgent call to action on Chen’s case, Chen was subjected to torture while in detention. She was strapped to an iron chair so that she could not move, which destroyed her health and made it hard for her to walk or stand up, said Lu.

Chen also did not have access to a lawyer until November 2016, as many lawyers decline to defend Falun Dafa adherents out of fear of being targeted themselves. Lawyers in China have themselves been arrested, detained, prosecuted, or jailed for providing legal representation to Falun Dafa adherents.

Lu said she has 60 days from the date of sentencing to make an appeal, and she is currently working with the lawyer to follow up on her mother’s case.

“We are very concerned about the uncertainty of my mother’s future,” Lu said.

What makes it even more distressing is how hard it is to obtain news about the status of her mother and her case. Lu is also very worried that her mother may become a victim of the Chinese communist regime’s state-sanctioned forced organ harvesting from prisoners.

Evidence of the horrific practice has been reported by Canadian investigators David Kilgour, a former MP and secretary of state for Asia-Pacific; and David Matas, an international human rights lawyer; along with China analyst and human-rights investigator Ethan Gutmann.

It is a multi-billion-dollar business that involves removing vital organs from prisoners of conscience—particularly Falun Dafa adherents in great numbers—while they’re still alive, killing them in the process, and selling the organs to paying patients in need of transplantation.

“I’m concerned about if my mother will be tortured, or even just disappear as a victim of the organ pillaging business,” said Lu.

There are a number of other cases of Falun Dafa adherents imprisoned in China with Canadian connections, including Sun Qian, a Canadian citizen, who has been illegally detained because of her practice of Falun Dafa since February 2017.