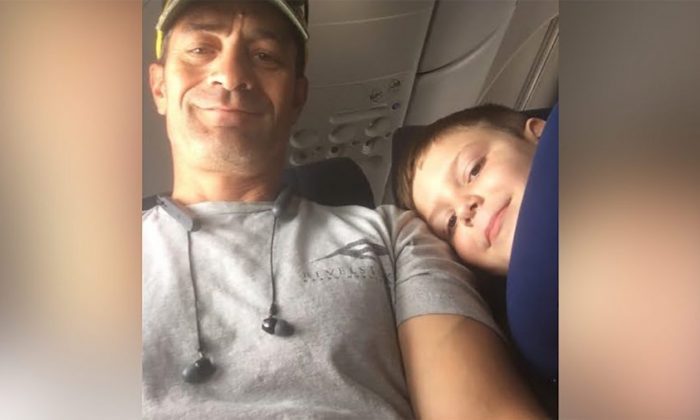 Ben Pedraza and Landon, who has autism, shared a flight from Las Vegas to Oregon on June 27. (Ben Pedraza via CNN)
US News

A Nevada woman had words of appreciation for a kind stranger who helped her autistic son cope with the anxiety of his first airplane flight all by himself.

Bjornson said in a June 27 Facebook post that she recently sent Landon to visit his father in Oregon by plane. The boy was to fly alone for the first time ever, the mother wrote, and so to make his journey as seamless as possible, she handed him a note to give to his seatmate. The note explained that Landon “might be nervous” and ask “Are we there yet?” many times.

“Please just make him feel safe and comfortable,” Bjornson wrote. She added that she enclosed $10 as a gesture of appreciation to whoever ended up sitting next to her son.

After the flight, Bjornson was relieved to learn the trip went off without a hitch and was especially moved by a sweet note she received from her son’s seatmate.

“Alexa, my name is Ben,” Ben Pedraza said in the note, which Bjornson posted on Facebook. “I was Landon’s seat neighbor for his flight to Portland. He did ask if we were there yet several times but he was a great travel buddy. We had a good time and played a few rounds of rock-paper-scissors. He’s a great kid and you’re a lucky mom.”

Pedraza also thanked her for the $10 Bjornson sent along but said he didn’t need it and donated it to an autism-focused charity.

“My heart just dropped,” Bjornson told KATU of seeing the message, which included a photo of Landon and Pedraza on the flight.

“I am so grateful to this individual, and that there are still kind people in the world who make a difference like I try myself to do as well,” Bjornson added on Facebook.

Pedraza later told KATU that while the two had fun joking around, Landon did have one request.

“We were cracking jokes, and after a while, he asked me to quit making dad jokes,” Pedraza said.

“This is so amazing. God Bless him,” wrote one commenter.

“This is amazing! You’re a good man, Ben!” wrote another.

Woman on Having 3 Autistic Brothers: ‘Taught Me Everything I Know to Be True About Life’

One person objected to sending a young child with developmental disabilities on a plane all by himself.

“I cannot imagine sending a 7 year old child on a flight alone. You sent your autistic child alone and offered $10 hoping you got lucky for someone to be a parent to the child you abandoned.”

“This was great,” another commenter wrote. “What a kind man! She was very fortunate. However, I would not be that brave to send my autistic child on a plane alone. Autistic children can be very unpredictable. Yes, the airlines is use to having minors fly alone. They do watch them carefully to and from the plane. However, one can not be sure the child would be able to sit next to someone that would work out for your child.”

For parents traveling with kids who have autism, the Marcus Autism Center recommends requesting bulkhead or aisle seats, bringing items to keep children entertained, making a visit to the airport ahead of time to get the child accustomed to the environment, as well as backup plans in case of flight delays or other emergencies.

The case recalls the recent launch of a Multi-Sensory Room at the Miami Airport to help young passengers with autism cope with the high-stimulus environment of a busy airport.

The soothing, peaceful environment is designed to give kids with autism and other related conditions a place to relax amidst the airport hustle.

The room, which will be open from 6 a.m. to 10 p.m. daily, is part of MIA’s MIAair program, which “allows passengers with different disabilities the opportunity to practice the travel experience in a safe and controlled environment,” the airport’s website states.