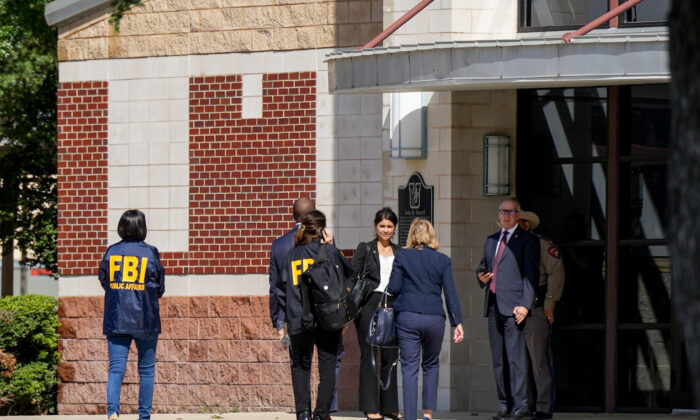 FBI public affairs officials arrive at the Uvalde High School auditorium for an update with state and local officials the day after a mass shooting at Robb Elementary, in Uvalde, Texas, on May 25, 2022. (Charlotte Cuthbertson/The Epoch Times)
Crime and Incidents

The mother of accused 18-year-old gunman Salvador Ramos who killed 19 students and two teachers in Texas said he wasn’t a violent person but suggested he was a loner who kept to himself.

“My son wasn’t a violent person. I’m surprised by what he did,” Adriana Reyes, the mother, told the Daily Mail on Wednesday. “I pray for those families. I’m praying for all of those innocent children, yes I am. They [the children] had no part in this.”

Reyes was speaking from a Texas hospital where her mother and Ramos’ grandmother was being treated for a gunshot wound. Officials said Ramos allegedly shot his grandmother before he committed the mass shooting inside Robb Elementary School in Uvalde on Tuesday.

“I had a good relationship with him. He kept to himself; he didn’t have many friends,” Reyes also told the outlet, adding that she spoke to her son on his birthday earlier this month. The woman said she didn’t know why Ramos shot his grandmother, who is said to be in critical condition and disputed reports that the two had problems.

Other family members, speaking to media outlets, confirmed that Ramos was quiet and appeared to mostly keep to himself. Several mass shooters, including Sandy Hook school shooter Adam Lanza, have been similarly described as quiet loners.

“Sometimes I’d take him to work with me. Not all the time, but sometimes. This past year he didn’t go to school. He didn’t graduate. You would try to tell him but kids nowadays they think they know everything,” Rolando Reyes, his grandfather, told ABC News. “He was very quiet, he didn’t talk very much.”

Ramos didn’t live with his mother because they had unspecified problems, Reyes added.

The grandfather continued to say that he wasn’t aware that Ramos purchased firearms in recent days, saying that he would have had to alert the authorities due to Reyes being a felon who cannot be in a house with guns.

“Evil swept across Uvalde yesterday. Anyone who shoots his grandmother in the face has to have evil in his heart,” Gov. Greg Abbott told a news conference on Wednesday. “But it is far more evil for someone to gun down little kids.”

During the press conference, investigators shed no light on the motive for the attack. The governor said Ramos had no known criminal or mental health history.