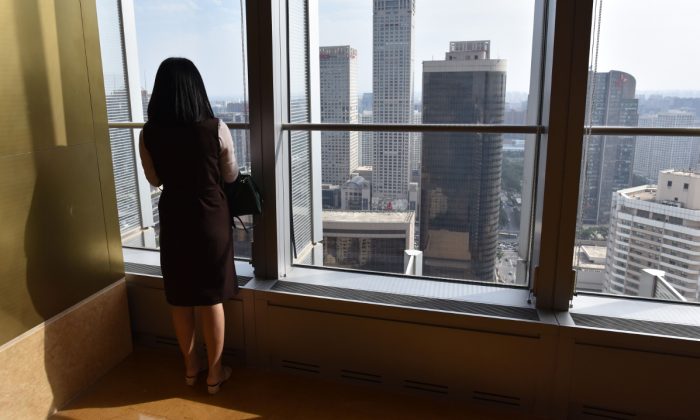 File footage of a woman looking out a building in China. (Greg Baker/AFP/Getty Images)
Social Issues

A woman nearly jumped out of a window after a conflict with her husband over their baby only saying “dad” and not “mom,” according to multiple Chinese news outlet.

The incident took place on June 24 in Hangzhou City of Zhejiang Province, China.

The woman, given the false name Li, got down from the ledge of the window after her husband apologized to her, according to Chinese news outlet Metropolis News.

The arguments stemmed from household responsibilities and educating their 16-month-old child, and both sides claimed violence from the other.

Eyewitnesses shot a video of Li with her leg dangling off the edge of the building from the ground levels.

Police body cameras reveal Li holding a knife in hand, with half of her body outside the 11th story window in the hallway of her condominium building.

“The child is 16 months, he’ll only say ‘dad’ and won’t say ‘mom,'” Li said as she straddled the window, according to police body camera footage. “He won’t drink from straws, he’ll only drink from baby bottles.”

Li also said in the video that her son was almost prematurely birthed. “What does it matter if he learns how to speak a little bit more slowly, isn’t that normal?” she asks the officers.

“If I argue with him, he smacks me with our iPad,” she said in the video. “He’s made my mouth bleed, my mouth is still bleeding now!”

After giving birth, the mother became a full-time housewife, just to raise the child, according to Qianjiang Evening News. She said she takes care of the child and does all the housework, but her husband isn’t supportive of her, and instead argues with and hits her.

Yet finally, Li’s husband apologized to her, and she got off the window.

Li later showed the injuries on her mouth and arms to the police.

However, during police questioning, the husband also claimed that his wife had struck him, and that he’d been given bloody noses from her. “Every time we argue, it’s like this,” the husband told the police.

The husband was given “critical education,” according to the Metropolis Bulletin. This simply means he was let off with only a warning.