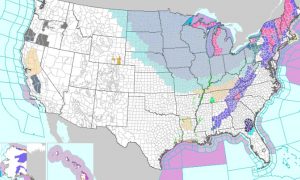 Mother Left 2 Toddlers in Car in Freezing Temperatures to Go to Bar: Police

A Kansas mother was arrested after she was accused of leaving her two children inside a car for hours while she went inside a bar.

Tiara Dillon, 26, went inside the Playerz Sports Bar in Lawrence on Jan. 29, a worker told WDAF.

She stayed inside for almost four hours until workers had enough of her erratic behavior and kicked her out around 1:30 a.m. on Jan. 30. Dillon went out to her car but she tried to get back inside the bar, saying her car wouldn’t start.

When Lawrence police officers arrived, Dillon had left the area but they found her car nearby. Two children, ages 2 and 3, were inside the vehicle.

Temperatures outside at the time was 6 degrees Fahrenheit with a wind chill of minus 12 degrees.

Dillon was arrested for driving under the influence and aggravated child endangerment. She was scheduled to make her first court appearance on Thursday.

Officials said that Dillon’s children weren’t injured but experts said it’s extremely dangerous to leave children outside or in vehicles while the low temperatures are so low.

“Because they are less able to regulate their body temperature than adults, children exposed to extreme cold can quickly develop a dangerously low body temperature (i.e., become hypothermic). Newborn infants are prone to hypothermia because of their large body surface area, small amount of subcutaneous fat, and decreased ability to shiver,” according to the American Academy of Pediatrics.

“Children and adults respond to cold extremes by shivering, developing ‘goose bumps,’ and experiencing lethargy and a slow heart rate. Eventually, the shivering ends, and disorientation and lack of responsiveness occur. Severe hypothermia can also result in arrhythmias, an abnormal beating of the heart.”

Dr. Travis Langner, University of Kansas Health System pediatric critical care division manager, said that it only takes a drop of a couple degrees in body temperature in children for hypothermia to kick in.

“Definitely within minutes, you could have that drop in what we call core temperature of the body. Once it gets below 95 degrees, we start becoming very concerned and want those patients to present to the hospital because part of the treatment is to re-warm them a specific way that can`t be done at home,” Langner told WDAF.

With large parts of the U.S. facing frigid temperatures, dangerous health risks like hypothermia can happen quickly. Stay safe in the #winter weather–learn what signs and symptoms to watch out for: https://t.co/UcSi0xTbsc #TuesdayThoughts pic.twitter.com/wZ9h9W1Q6d

“In the United States, certain populations (e.g., alcoholics; drug users; the elderly, homeless, and chronically ill persons; and those with pre-existing heart disease) are at increased risk for dying from hypothermia,” it continued.

“When your body temperature drops, your heart, nervous system, and other organs can’t work normally. Left untreated, hypothermia can eventually lead to complete failure of your heart and respiratory system and eventually to death,” it stated.