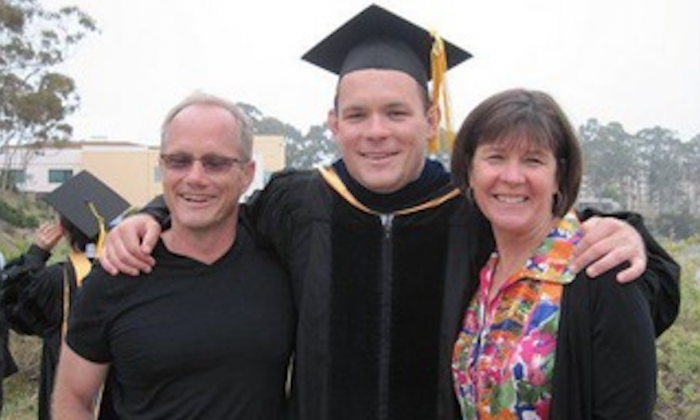 Shane Todd with his parents Rich Todd (L) and Mary Todd (R) on his being awarded a doctorate in mechanical engineering. (Courtesy the Todd family)
US News

The ongoing investigation of Chinese tech giant Huawei has helped an American mother regain hope that, after seven years, she will see justice done for the death of her beloved son, Shane Todd.

For years, the Todd family has been sending evidence and analysis reports to Singapore authorities and agencies of U.S. government, trying to prove that Shane Todd was murdered in connection with a cover up of Huawei’s alleged theft of U.S. technology. He was found hanged in his apartment in Singapore on June 24, 2012.

Huawei is currently under investigation by federal prosecutors for intellectual property theft and for violating sanctions on Iran.

“We want a congressional investigation into the death of my son in relationship to Huawei,” said Mary Todd, Shane Todd’s mother, in a recent phone interview with The Epoch Times.

The Todd family hopes the investigation of his death can reveal “how far some foreign companies and governments will go to protect clandestine work or international reputation,” as the parents Rick and Mary Todd stated in an open letter published online.

Shane Todd had a doctorate in electrical engineering and had been leading a special GaN (Gallium Nitride) development team with the Institute of Microelectronics (IME), a well-regarded division within the Singapore government’s Agency for Science, Technology, and Advanced Research.

Veeco’s technology could be used for both commercial and military purposes.

FT reported that IME got a commercial application license from Veeco, while at the same time, IME was also working with Huawei. This connection gave Huawei an opportunity to obtain Veeco’s technology through working with IME. Once the technology was obtained, it could be put to military uses.

Todd told his family that he was being pressured to compromise U.S. security, and he refused to do so. He was worried about his own safety because of the work he was doing with this Chinese company.

This Chinese company was later identified as Huawei, through documents found on Todd’s external Seagate hard drive after his death.

“Mom, I’m going to call you every week, and if you don’t hear me for a week, call the U.S. embassy because something’s happened,” Mary Todd recalled her son saying.

Distressed, Shane Todd decided to quit his job with IME, leave Singapore, and come back to the United States. He gave IME 60 days notice.

Before his death, Todd received a job offer from Nuvotronics, a U.S. research firm working with the U.S. Defense Department and NASA. He was offered a $105,000 pay package, according to the FT report.

‘Fought For His Life’

The Todd family said that from what they found in Shane’s apartment, that he was in the process of washing and folding his clothes, and packing his luggage at the time he died.

His airplane ticket to the United States was found on his desk after he died.

But Singapore police immediately ruled Shane Todd’s death a suicide, and refused to reopen the investigation even after the Todd family informed them Shane Todd had expressed fear for his life.

Mary Todd said that the Singapore police has refused to provide her any written investigation report on how they determined the death was suicide.

Shane Todd’s computers were all taken away when his family arrived in Singapore, but luckily, the Todd family found an external Seagate hard drive left in his apartment. He had backed up his computers on the hard drive.

Shane Todd’s work and relations with IME, Veeco, and Huawei were all recorded in this hard drive.

“God was helping us,” Mrs. Todd told The Epoch Times.

After Shane Todd’s body was brought back to the United States, his family found experts to analyze the possible cause of his death.

Todd’s body was found with bruises, wounds, and scratch marks. “He fought for his life,” said Mary Todd.

“There is very little to no support that Shane Todd’s manner of death was suicide,” said a report prepared by Dr. David Camp. Camp is department chair and tenured professor of criminal justice at Blackburn College, and founder of EnSol LLC, which specializes in detecting hidden information.

The Singapore police ruling of suicide was largely based on suicide notes left in Todd’s apartment, Mary Todd said.

The notes weren’t written, but typed in the way of “Asian English, not American English,” she said.

When the notes were presented to Mary Todd by a Singaporean detective, Mary Todd read the notes and then handed them back to the detective. “My son might have killed himself, but he did not write this,” she told him.

Camp also stated in his report that “indications suggest a person from an Eastern culture such as China” [as the author of the notes].

The Todd family naively sent all the evidence and analysis reports they got in the United States to the Singapore authorities, hoping they would reopen the investigation.

“Everything we’ve got, stupidly, we sent to them,” said Mary Todd, and added: “what they did was they took our evidence, and used everything we sent against us in the inquiry.”

When the Todd family went to the inquiry in Singapore in May 2013, there were 10 lawyers, five representing IME and five representing Huawei, “against our little family to prove my son committed suicide,” Mary Todd said.

The FT report generated lots of attentions from the media, Hollywood, the FBI, and the U.S. Senate and Congress, but accomplished very little to bring justice for Todd’s death.

Mrs. Todd said that then-Rep. Frank Wolf (R-Va.), in his Washington office, told her that she and her husband were doing the right thing, but they weren’t going to get anywhere because of money and power.

Mary Todd was told by Wolf that Huawei had bought out Washington, and it had a law firm in every corner.

Still, Mary Todd remember receiving help from many senators and congressmen, but she believes “this story has been shut down from the highest level under the leadership of Hillary Clinton and Barack Obama.”

To continue seeking for justice to her son’s death, Mary Todd published a book: “Hard Drive: A Family’s Fight against Three Countries.” The book includes the details of the Todd family’s experiences dealing this case over the last seven years.

Now, with the current investigations on Huawei, Mary Todd hopes new light can be shed on the investigation of Todd’s death.

Mary Todd told The Epoch Times that all the evidence and reports were recently delivered to the National Security Agency, with help from Rep. Greg Gianforte (R-Mont.).

Mary Todd’s effort has been supported by her families and friends.

“In light of the Chinese government’s apparently deliberate schemes to use its tech companies to illicitly acquire commercial and military grade technology, Americans should be particularly disturbed with the details of Dr. Todd’s case,” said Christina Villegas, who is an assistant professor of political science at California State University, San Bernardino. She is also Shane’s cousin and co-author of the book: “Hard Drive: A Family’s Fight Against Three Countries.”

Villegas, in a recent letter to Gianforte supporting the federal investigation of Huawei, said that the Huawei indictment should include investigation into the death of American engineer Shane Todd.