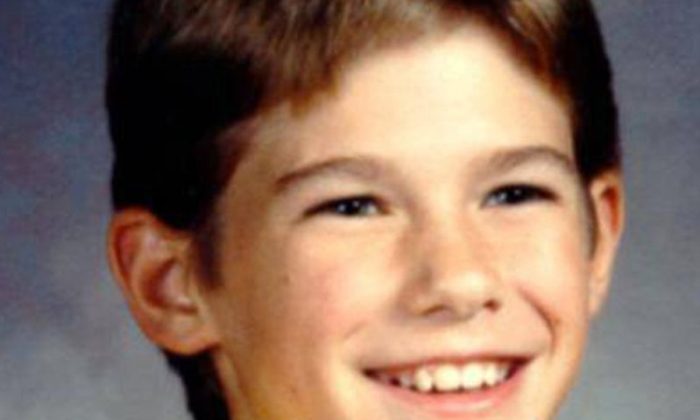 Jacob Erwin Wetterling was a boy from St. Joseph, Minnesota, who was kidnapped from his hometown at the age of 11 on October 22, 1989. (The National Center for Missing & Exploited Children)
Crime and Incidents

MINNEAPOLIS—The mother of a Minnesota boy who was abducted nearly 27 years ago and whose buried remains were identified this weekend said Monday that her family is grieving.

“The Wetterlings are deeply grieving and are pulling our family together. We will be eager to talk to media as soon as we are able,” Patty Wetterling said in a short statement released by the Jacob Wetterling Resource Center and posted on Facebook.

A masked gunman abducted 11-year-old Jacob Wetterling on Oct. 22, 1989, as he rode his bicycle near his home in the central Minnesota community of St. Joseph, about 80 miles northwest of Minneapolis.

A law enforcement official told The Associated Press on Saturday that a person of interest in Jacob’s abduction took authorities to a field in central Minnesota where Jacob’s buried remains and other evidence were recovered. The official spoke on condition of anonymity because of the ongoing case.

The Stearns County Sheriff’s Office said Jacob’s remains were identified Saturday, and that authorities expect to be able to provide more details this week.

A person of interest in the case, Danny Heinrich, 53, has been held since last October on federal child pornography charges. Investigators first questioned Heinrich shortly after Jacob’s abduction. Authorities have been careful to avoid calling him a suspect in the boy’s disappearance and death. Heinrich he has always protested his innocence in the case.

Authorities have not publicly said it was Heinrich who led them to Jacob’s remains.

Patty Wetterling has become a nationally recognized advocate for missing and exploited children since the loss of her son. A 1994 federal law named for Jacob requires states to establish sex offender registries.

“Everyone wants to know what they can do to help us,” the mother said in her statement. “Say a prayer. Light a candle. Be with friends. Play with your children. Giggle. Hold Hands. Eat ice cream. Create joy. Help your neighbor. That is what will bring me comfort today.”