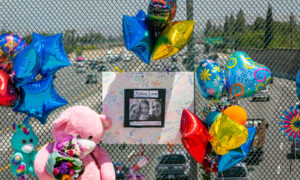 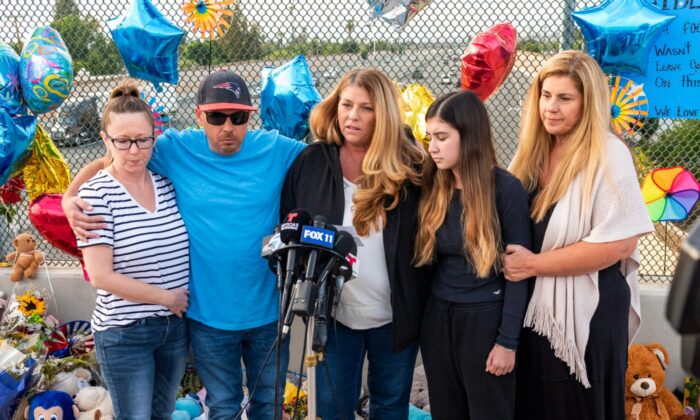 Family members of six-year-old Aiden Leos stand at a makeshift memorial on the Walnut Avenue overpass at the 55 Freeway in Orange, to announce that the reward for information leading to the suspects in the road-rage shooting death of Leos, Calif., on May 25, 2021. (Leonard Ortiz/File/The Orange County Register via AP)
Crime and Incidents

YORBA LINDA, Calif.—The mother of a Southern California boy killed in a road rage shooting remembered him Saturday as a six-year-old with a vocabulary beyond his years who exuded warmth and tenderness.

“He gave us such joy, giving us purpose to our life. I felt so honored to be Aiden’s mommy,” Joanna Cloonan said at an open-casket memorial service for Aiden Leos.

The boy was fatally shot in the abdomen on May 21 while seated in the back seat of a car driven by Cloonan, on State Route 55 in the city of Orange.

According to accounts from the mother and witnesses who stopped to help her, another car cut her off, she responded with a hand gesture, the car slipped in behind her, and someone inside fired a shot through the rear of her car.

A reward for information leading to the arrest of a suspect has grown to at least $500,000, Southern California News Group reported.

“I want nothing more than to find justice, though it won’t bring you back into my arms. My precious son had his life ripped away for absolutely no reason,” Cloonan told mourners at Calvary Chapel in Yorba Linda, where Leos was a kindergarten student.