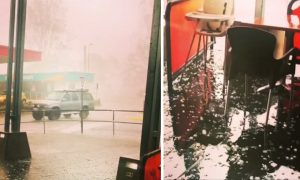 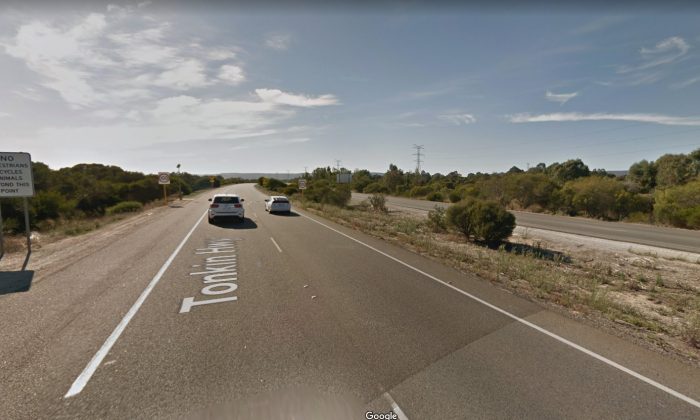 The section of Tonkin Highway in Perth, Australia, where a 4-year-old boy was seen on top of a car roof on Jan. 4, 2019. (Screenshot/Google Maps)
Australia

A 4-year-old boy hitched a 50 mph ride on a car roof,  giggling down the freeway dressed only in his diaper as other drivers honked and flashed, trying to get his mother to pull over.

The woman has now been charged with dangerous driving. The family says that her autistic son must have climbed out the window and into the roof basket before she set off through the suburbs of Perth, Australia, during what they called a “freakish event.”

The ride was caught on video by multiple home security cameras and by some road users.

“I thought it might be a teddy bear or something like that,” witness Kyle Jansen told Perth Now.

He pulled up alongside in his SUV traveling at around 42-50 mph, catching the moment on video.

“As soon as she got right next to me, I noticed a little boy in nappies sitting in the roof rack on top of the car,” Jansen said.

The father of a young child filmed riding on a car’s roof rack in Perth’s suburbs says the four-year-old is autistic and can sometimes be to control. https://t.co/fu0H6sxa9X

“There was another car flashing their lights and hooting. I don’t know how far back they were doing that.”

When the car rounded a big bend, Jansen said that child was “really hanging on.”

“You could see his weight actually shifted. I’m surprised he didn’t come out. He was just giggling, he was having a ball.”

“He was smiling a lot and laughing, but he was really gripping on,” he said.

‘People are Flashing Their Lights and Hooting’

According to Jansen, people were trying to raise the mother’s attention.

“People are driving and flashing their lights and hooting—you should just pull over,” Jansen said.

A Perth mother is being questioned by police after driving through the city's suburbs for 10 minutes with a child on the roof of her car. @geofparry7 #TheLatest #7News pic.twitter.com/ZW3XyUOWBe

The journey appears to have lasted around 10 minutes, according to reports, and at least 7 miles, before the woman finally pulled over at a gas station.

Police said that they received reports of a Holden Captiva on Tonkin Highway between Camillo and Harisdale in the suburbs of Perth on the afternoon of Jan. 4, reported Perth Now.

The highway has a speed limit of around 62 mph.

Police later said that the boy’s mother, 36, was being charged with dangerous driving.

After days of speculation and many critical comments on social media, the boy’s mother attended a press conference on Jan. 8.

The woman, who only wants to be known as Erica, did not speak. Instead Gerry Georgatos, the national coordinator of the National Indigenous Critical Response Service, spoke on her behalf.

“This was an extraordinary event, it was a freakish event,” he said, according to the Sydney Herald.

“They are just thankful and counting their blessings that a miracle actually occurred … that the child wasn’t injured.”

The boy had been restrained in the car by his mother along with two of his siblings, according to Georgatos, but freed himself and climbed onto the roof before the car took off.

“He obviously scurried out the window, climbed up … onto the roof rack.

“At some point there was a blind spot, mum was blind-sided.”

Georgatos rejected rumors that the boy had done something similar in the past.

One witness told Perth New he followed the car with the boy on top to Harrisdale at about 6 p.m.

“I beeped the horn a few times and she [the driver] pulled over shortly afterwards near Baker’s House,” he said.

“She looked truly shocked when I told her that her child was on the roof.

“[She] said something about he uses his car seat to climb up there.”

The boy’s father said that the boy is autistic, according to Perth Now, and is difficult to contain at times.