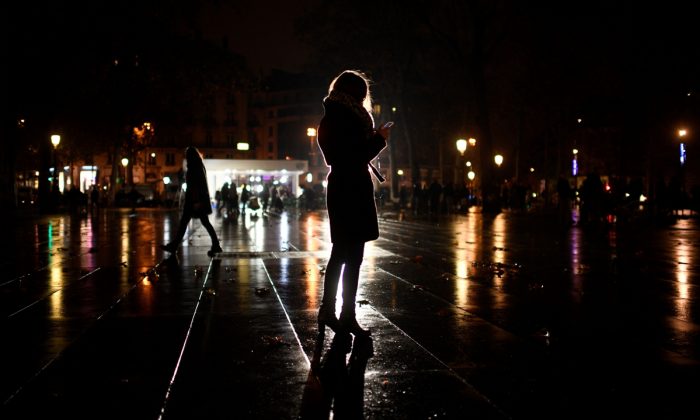 A woman on a phone at night. (Martin Bureau/AFP/Getty Images)
Social Issues

A woman faked her own kidnapping in an attempt to get her two sons to pay a ransom—money that would be used to pay off loans she had taken out, according to Chinese news media Xiamen News.

The woman, surnamed Yang, recorded a video of herself with her mouth gagged and arms and legs bound while she struggled in front of a camera. She sent the video to her sons and other relatives on July 9, but was later found out to have staged the kidnapping on her own.

She was found alone in a building in Xiamen, the capital city of China’s Fujian Province. Police detained her for attempting to defraud her sons.

Yang sneaked into a building, and recorded a video of herself tied up and being held captive. She sent pictures and videos to family members, and acted as the kidnapper.

“This is your family member,” Yang wrote to one of her relatives through WeChat messages, according to Xiamen News. “Now she is in my hands, it’d be best to not tell the police, otherwise I’ll kill her.”

WeChat is a major chat app used in China.

The relative asked who the kidnapper was, but only received a video of Yang held captive. Yang then refused a video conversation.

“What crime did my mother commit against you?” the relative wrote back. “I’ll give you compensation and apologize, whatever you do, don’t hurt her.”

Then Yang continued the act. “She hasn’t wronged me, I don’t know her, this is my job.”

The relative then responded by saying that they must guarantee Yang’s safety, and the family won’t pay the ransom until they can see her.

The family then contacted the local police at an undisclosed time after the conversation began.

After the location was found, a police investigation of security cameras revealed Yang had walked into the building by herself, and no one else had recently gone in.

Police found Yang alone in the building. She was then detained for attempting to extort money from her sons. Chinese media did not report the punishment.