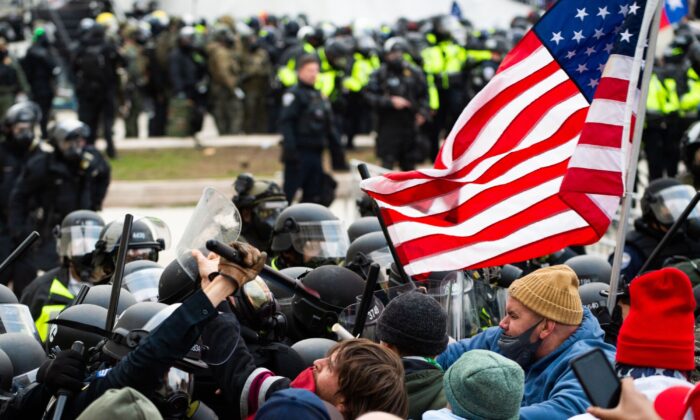 Protesters fight with riot police outside the Capitol building in Washington on Jan. 6, 2021. (Roberto Schmidt/AFP via Getty Images)
Crime and Incidents

Mother and Son Arrested After Allegedly Helping in Theft of Pelosi’s Laptop on Jan. 6: DOJ

A New York mother and son were arrested and charged by federal prosecutors for allegedly helping in the theft of House Speaker Nancy Pelosi’s (D-Calif.) laptop during the Jan. 6 Capitol incident.

Maryann Mooney-Rondon and Raphael Rondon, both of Watertown, face charges related to the Jan. 6 breach, appearing in a federal court in Syracuse, according to a news release from the Department of Justice (DOJ). Raphael Rondon also faces charges of possessing an unregistered sawed-off shotgun, the agency said.

The pair appeared in front of a federal court in Syracuse, where a judge ordered them “stay out of Washington D.C. unless for Court, Pretrial, or consultation with attorney.” They were released pending further proceedings, said the U.S. Attorney’s Office for the Northern District of New York.

It’s not clear if either Maryann Mooney-Rondon and Raphael Rondon have attorneys.

The mother and were both charged with one felony—Obstruction of an Official Proceeding—and six misdemeanors related to their entering the Capitol and entering Pelosi’s office. For the weapons possession charge, Raphael Rondon could face 10 years in prison and a $250,000 fine.

A tip to the FBI led agents to the mother and son, according to a statement of facts from an FBI special agent in court documents.

Mooney-Rondon allegedly admitted to being in both the Capitol the day of the riots and inside Pelosi’s conference room, the documents said. She allegedly provided gloves or a scarf to a man to steal Pelosi’s laptop without leaving fingerprints.

The #FBI is still seeking information about the people involved in the violence at the U.S. Capitol on January 6. If you know this individual, visit https://t.co/iL7sD4WEy3 to submit a tip that references photo 225. pic.twitter.com/5wz0fdZ6fe

“He asked, he said, give me—I don’t know if it was gloves or a scarf I was wearing—and like I said … he scared me,” she was quoted as saying in the court documents.

“If I recall, the guy was going to yank it out. I’m like, dude, don’t do that, I mean that’s, I mean just the computer, you can’t pull the cables out, it’ll ruin everything,” Mooney-Rondon said, according to the document.

Mooney-Rondon then said she believes she saw the man put the computer in his backpack. Her son told investigators that be thinks he might have pushed the computer “in his bag a little bit using a glove ’cause he didn’t want to get his fingerprints on it,” the document stated.

“So I assisted him a little bit, and that was probably stupid of me,” the son said, according to the document.

Several months ago, the FBI raided a business in Homer, Alaska, owned by Paul and Marilyn Hueper, who said they attended a demonstration at the Capitol in Washington on Jan. 6. The couple said they didn’t partake in the breach, while Marilyn Hueper told news outlets that the FBI was mistaken.

The FBI had attempted to explain that the raid was conducted “based in part on evidence showing that residents (a married couple) trespassed on the ground of the U.S. Capitol.” But court documents filed last week state there was “probable cause” to believe it was Rondon and Mooney-Rondon instead.

On Feb. 15, the FBI wrote on Twitter it was looking for two people in connection to the Jan. 6 incident and posted photos of the pair. Rondon and Mooney-Rondon confirmed they were the people in the February photo, according to the court documents.