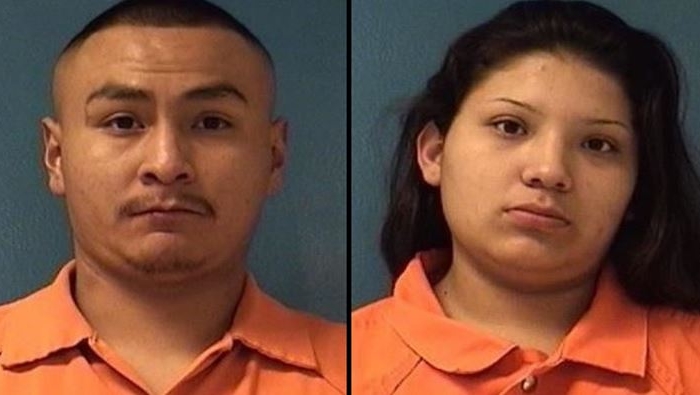 Tyrell Bitsilly, 21, and Shayanne Nelson, 18, face criminal charges after a 3-year-old boy in their care found a gun and shot his infant sister in McKinley County, New Mexico, on Dec. 8, 2018. (Gallup Police Department)
Crime and Incidents

A New Mexico couple is facing criminal charges after a toddler gained access to a firearm and shot a baby girl in the face.

According to a criminal complaint, Shayanne Nelson, 18, and Tyrell Bitsilly, 21, were in the shower at the Zia Motel in McKinley County on Dec. 8 when the shooting happened.

Nelson’s 3-year-old son fired the gun, hitting the 8-month-old infant in the face.

Nelson said that she wasn’t aware of a gun in the room, according to the complaint, which was obtained by KOB. She claimed a previous room occupant may have left it there.

The infant was rushed to the Gallup Indian Medical Center, where she was listed in critical condition.

Her mother told the police that she and her boyfriend ran out of the bathroom when they heard the gunshot and found the baby lying in the middle of the bed bleeding from the face.

Bitsilly described the gunshot as a “pop,” reported the Gallup Sun. He said he grabbed the child. A witness, who was found holding the child when police officers arrived at the scene, said that Bitsilly was wiping the gun clean.

Bitsilly was involved in another shooting earlier this year.

He was charged with aggravated assault on a household member, shooting at a dwelling, tampering with evidence, and two counts each of aggravated assault and abuse of a child after allegedly firing a gun on Oct. 24 in downtown Gallup, reported the Gallup Sun.

A woman said Bitsilly fired a gun inside her vehicle while it was parked. He then left the car and walked away.

The woman said her mother and her two children were in the backseat at the time. The woman was not named so it wasn’t clear if it was Nelson.

Bitsilly allegedly fired the gun after she said she wanted to break up with him.

The woman said Bitsilly told her, “This is what you want.”

No updates to the case appear to have been reported.