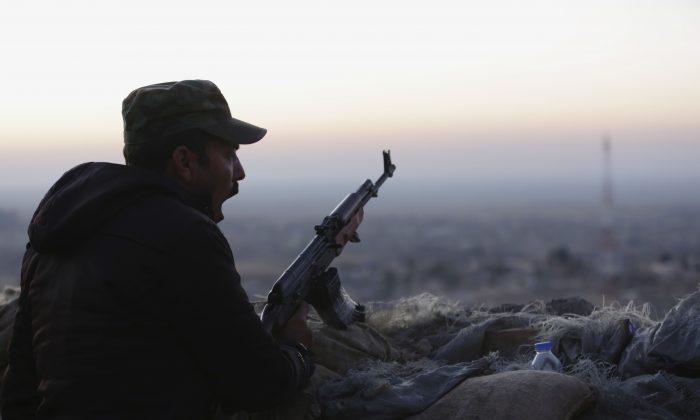 A Kurdish fighter, known as a peshmerga, yawns as he stands guard on the frontline in Sinjar, Iraq, on Nov. 13, 2015. (AP Photo/Bram Janssen)
Middle East

QARQASHAH, Iraq—In the buildup to a long-awaited offensive on the city of Mosul, Kurdish forces are seizing new territory in northern Iraq that they say will become part of their autonomous region. The moves are further straining relations between the Kurds and the Baghdad government and Shiite militias, all ostensibly allies in the fight against the Islamic State (ISIS).

Just east of Mosul, Kurdish engineering teams on a recent day were laying down a 3-meter wide, 20-kilometer long trench and 2-meter high berms, marking the new front line after recapturing the village of Qarqashah and neighboring hamlets from ISIS earlier this month.

The new de facto borders established by the Kurdish fighters, known as peshmerga, raise the potential for conflict between Iraq’s Kurds and Arabs after any eventual defeat of ISIS — just as in neighboring Syria, where Kurds have also dramatically expanded their zone of control.

“All the areas that have been liberated by the peshmerga forces, our (Kurdish) forces will stay there,” said Falah Mustafa, the head of the Iraqi Kurdish region’s foreign relations department, echoing statements by numerous officials.

Largely with the help of U.S.-led coalition airstrikes, Kurdish forces have taken territory equivalent to around 50 percent of the size of their recognized autonomous zone.

Their first gain came just days after ISIS militants took Mosul in the summer of 2014 and stormed down into central Iraq as the military collapsed. Kurdish forces seized the city of Kirkuk, which they have long claimed as their own.

Ostensibly, the move was to protect the city from ISIS, but Kurdish President Massoud Barzani quickly said the Kurds would keep it. From there, they continued pushing ISIS out, capturing much of the surrounding province.

Since then, they have taken further territory in the nearby Ninevah province, where Mosul is located, with “shaping operations” ahead of an expected assault on the city. Much of it is territory with a large Kurdish community that the regional government has claimed for years — but not all, meaning the grabs are bringing in populations where some are wary of Kurdish domination.

Similarly, in neighboring Syria, long-oppressed Kurds have used the chaos of the civil war and fight against ISIS to carve out a zone of control across the country’s north.

The new clout of the main Syrian Kurdish fighting force, known as the YPG, has led to tensions with almost every player on the ground there, including Sunni Arab rebels and government forces. Turkey this week launched a major cross-border offensive, aimed mainly at limiting Kurdish expansion.

In Iraq, after the capture of the Qarqashah area, Prime Minister Haider al-Abadi pointedly demanded a halt to the peshmerga advances.

But the Kurds refused. The Kurdish regional government’s spokesman, Safeen Dizayee, said the peshmerga “will not stop their advances until all Kurdistan’s territories in the Ninevah region are liberated.” He added that they will not withdraw “from areas they are going to liberate in the future.”

Al-Abadi seemed to soften his stance, saying all forces have the right to participate in the Mosul offensive. Still, he underlined that “Ninevah will stay unified.”

But Barzani in recent weeks has said a “new formula” is needed to administer the province, without elaborating.

Mustafa said the Kurds were acting because minority groups in Ninevah no longer trust the central government to ensure their safety after the rise of Shiite militias that have been accused of abuses in past anti-ISIS operations.

Both the peshmerga and the Shiite Arab militias have steadily grown more powerful as the United States and Iran have funneled weapons, training and money into Iraq to back the fight against ISIS.

Some 230 kilometers (140 miles) southeast of Mosul, deadly clashes broke out in April between Kurdish fighters and Shiite militias in the town of Tuz Khormato, home to Kurds, Sunni Arabs and Shiite Turkmens.

Jassim Mohammed Jaafar, a Shiite Turkmen member of parliament from the Mosul area, said he worries a similar scenario will play out in parts of Ninevah after Mosul is retaken.

“The Kurds have forces to defend their areas. If we need forces to protect our areas, we will use the Popular Mobilization Forces,” he said, referring to the state-backed organization under which the militias are grouped.

A spokesman for the Popular Mobilization Forces, Hashim al-Musawi, said “we have real concerns about the Kurdish forces.” He cited reports that Kurds have deported Arab civilians from recaptured territory. Amnesty International and Human Rights Watch have published reports documenting such allegations.

Almost a year ago, Kurdish forces retook the northwestern region of Sinjar, dominated by the Yazidi religious minority, who were subjected to massacres and enslavement under ISIS rule. Tens of thousands of Yazidis fled into the Kurdish region for protection.

Many Yazidis do not consider themselves Kurdish, but rather a distinct ethnic minority, yet Kurdish politicians laid claim to Sinjar during the same press conference in which they declared it “liberated.”

Shiite militiamen have also altered Iraq’s demography after pushing ISIS out of hundreds of villages in central Diyala and Salahuddin provinces and largely administering security in the areas they retook. While not backed by coalition airstrikes, Iranian advisers, weapons and funding have helped the militias outstrip Iraq’s conventional armed forces.

Many of the mostly Sunni Iraqis who were displaced from those provinces by the violence say they don’t feel safe returning with militias in control. Others have been prevented from returning due to strict so-called security checks.

Lukman Sharawani, commander of a small unit of Kurdish fighters stationed north of Mosul, explained that Ninevah — his home province —was once one of the most diverse parts of Iraq.

“Mosul has always been a multi-ethnic city,” he said. The plain that lies to the north and east of Mosul is home to some of the region’s oldest Christian communities as well as villages that were once home to Shabaks, Yazidis and Kurds.

He pointed to allegations of looting, destruction and arbitrary detentions by Shiite militias after ISIS was driven out of the western city of Fallujah this year.

“We don’t want the same to happen here,” he said.