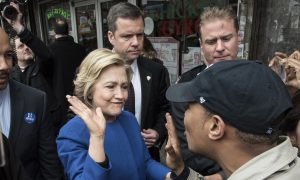 More Than Half of Americans Have a Negative Opinion of Hillary Clinton, Says AP Poll
0 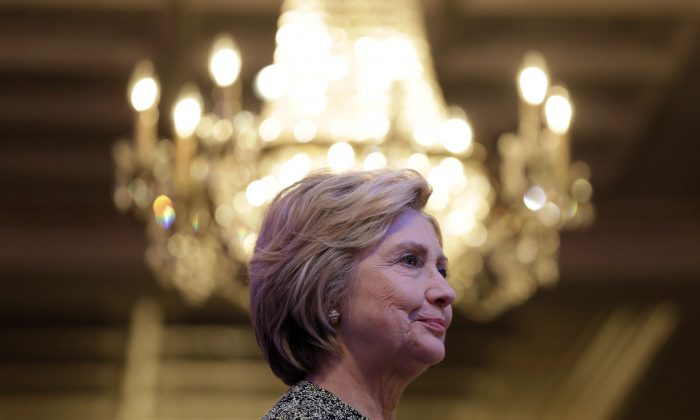 That’s according to a new Associated Press-GfK poll, which shows that a majority of Americans believe none of the remaining candidates for president represents their opinions at least somewhat well.

At least half of Americans say they would be disappointed or even angry if either of the front-runners—Donald Trump for the Republicans or Hillary Clinton for the Democrats—are nominated, the survey shows. And a quarter said they would be disappointed or angry if both win nominations. Still another quarter would feel at best neutral if both are nominated.

Among all registered voters, 63 percent say they wouldn’t consider voting for Trump and half say the same about Clinton.

About one-fifth of those surveyed say they’d either probably or definitely vote for a third-party candidate if Trump and Clinton are the nominees.

Roland Bauer, 64, a retiree from Winter Springs, Fla., plans not to vote if Clinton and Trump are nominated. “I don’t trust politicians,” he says. “Everybody is on the take.”

More Than Half of Americans Have a Negative Opinion of Hillary Clinton, Says AP Poll

Bruce Bertsch, a libertarian and retired human resources director from San Diego, says the public’s lukewarm reaction to the major-party hopefuls doesn’t come from disinterest or apathy—quite the opposite. Here’s how his friends and family see the candidates:

“Hillary Clinton is a liar. Donald Trump is an idiot. And Bernie (Sanders)? He’s an old fool,” Bertsch, 78, said in a telephone interview Monday. To Bertsch, the Republican and Democratic competitors look like this: “The Democrats want to spend my money. The Republicans want to tell me how to live my life—and then spend my money.”

The AP-GfK poll suggests the general election, after the parties name nominees, will be less about emotional appeals and inspiration and more about getting actual voters to cast votes before the end of Election Day. It’s what insiders call the “ground game.” And much of it is played over the airwaves at enormous expense.

“In the general election, it’s an air war,” said former Republican strategist Rich Galen, author of a political blog. “The goal is to get not only your people out to vote, but to get these people who are maybe sitting on the sidelines excited enough to come out and join the game.”

Less than half of Americans say any of the remaining candidates, including Sanders, Ted Cruz or John Kasich, comes close to representing their opinions on the issues.

And in a year dominated by Trump-generated theatrics and his so-far scant policy details, substance matters, most voters say. Nearly 9 in 10 Americans call a candidate’s positions on the issues extremely or very important to them.

Among all the remaining candidates, only Sanders, Clinton’s Democratic rival, generates significantly more positive than negative ratings from Americans, with 48 percent saying they have a favorable opinion of him and 39 percent unfavorable. He’s also the only candidate described by a majority of Americans as at least somewhat likable, civil, honest and compassionate.

Americans are fairly evenly divided on Kasich, with 34 percent expressing a favorable view and 31 percent an unfavorable one. Another 34 percent still don’t know enough about him to say.

The AP-GfK Poll of 1,076 adults used a sample drawn from GfK’s probability-based KnowledgePanel, which is designed to be representative of the U.S. population. The margin of sampling error for all respondents is plus or minus 3.3 percentage points.

Respondents were first selected randomly using telephone or mail survey methods and later interviewed online. People selected for KnowledgePanel who didn’t otherwise have access to the Internet were provided access at no cost to them.