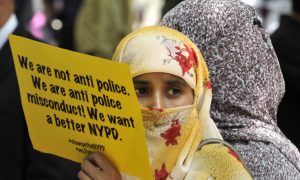 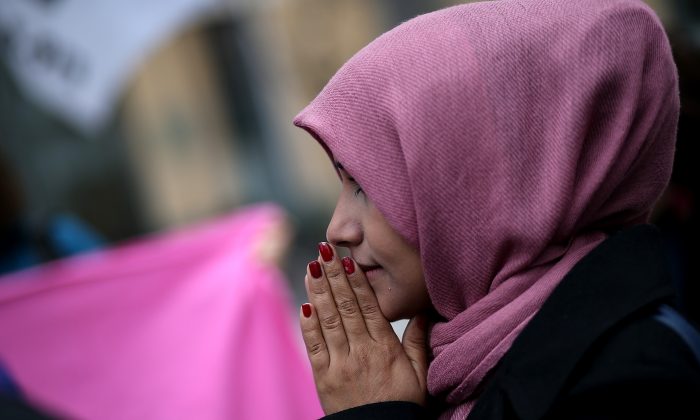 Naseen Kashfh looks on during a news conference in front of the Oakland Federal Building to speak out against a proposed military campaign against ISIS on February 17, 2015 in Oakland, California. (Justin Sullivan/Getty Images)
US

Extremist Acts in America Not Limited to Jihadist Threat

At the White House Summit on Countering Violent Extremism where representatives from over 60 countries have convened to discuss best counter-terrorism practices, the focus has been on terrorists who claim legitimacy from Islamic ideology.

President Barack Obama made clear the theme of the summit was the threat of Islamic extremists. In his remarks on Wednesday, he mentioned recent terror attacks in Paris, France, Copenhagen, Denmark, and Ottawa, Canada, as well as the aggressive recruitment efforts of the terrorist group ISIS.

While the president said that the public should not recognize the extremist groups’ perversion of Islam—saying, “no religion is responsible for terrorism. People are responsible”—the summit has concentrated on ways to prevent people of Muslim faith from radicalizing and becoming a violent extremist.

Obama spoke of a pilot program launched by the Department of Justice in Boston, Minneapolis, and Los Angeles, that will work with community organizations there to do just that. The president called for collaboration with the Muslim community to fight terrorism, but many are concerned that the program will lead to religious profiling that targets people of Muslim faith.

But Islamic extremism is not the only terror threat in the country. Violent attacks come in all shapes and sizes. A report released last week by the Southern Poverty Law Center analyzed 63 domestic terror attacks that occurred between 2009 and Feb. 1, 2015, and found that only five of them involved perpetrators guided by extremist Islamic ideology.

Forty-nine percent of the attacks on domestic soil were motivated by anti-government ideology, while 51 percent were motivated by hate, including white supremacist, misogynist, and radical Islamic ideology. Moreover, the vast majority of the attacks were performed by “lone wolves,” or people who acted alone and without ties to a group, according to the report.

Mark Potok, senior fellow at the Law Center, said the organization released the report ahead of the White House summit in an effort to urge the administration to recognize the threat of American terrorists targeting Americans.

“Since 9/11, quite a lot of academic studies have shown that more people were killed in the U.S. by the extreme right than jihadists, even homegrown jihadists,” Potok said. “We’re telling the White House, please don’t forget the threat of domestic terrorism. There’s a real danger to only paying attention to jihadist threats.”

The Combating Terrorism Center at West Point released a report in 2012 documenting the threat of far-right extremists in the country, including the Ku Klux Klan, neo-Nazi groups, and fundamentalist Christian groups like the Aryan Nations.

An analysis by the University of Maryland-based National Consortium for the Study of Terrorism and Responses to Terrorism also found that between 2000 and 2012, the most terror attacks on U.S. soil were conducted by the Earth Liberation Front (59), followed by the Animal Liberation Front (41), and unaffiliated individuals (33).

The research center defines terrorism as “the threatened or actual use of illegal force and violence by a non-state actor to attain a political, economic, religious or social goal through fear, coercion or intimidation.” Attacks include those on individuals and on property.

There has been a disparity in the resources the U.S. government and governments abroad devote on countering “jihadist” versus “non-jihadist” extremism, because jihadist extremists are more likely to carry out attacks with lots of casualties, said J.M. Berger, a research expert on violent extremism. He is the author of “Jihad Joe: Americans Who Go to War in the Name of Islam,” and co-author of “ISIS: The State of Terror.”

But Berger also says there is the bias toward jihadist extremism. The bias “is disproportionate to the numbers, in terms of frequency of attacks and the numbers of adherents,” he commented via email.

Concerns With Past U.S. Counter-Terror Programs

Past countering-violent-extremism (CVE) programs have singled out Muslim communities for broad surveillance and intelligence-gathering, said former FBI agent and fellow at the Brennan Center for Justice, Mark German. “It reinforces false perceptions that Muslim communities are the major source of terrorism, if not the only source,” said German.

German notes that many CVE programs in the country are modeled on a theory of “radicalization,” whereby religious practices and expression of grievances toward the government are indicators of a person radicalizing and becoming a terrorist.

The website The Intercept obtained a 2014 document from the National Counterterrorism Center that describes a rating system for police and community members to assess the risk of a person becoming a violent extremist, with categories like “expressions of hopelessness, futility,” a family’s “awareness of each other’s activities,” and levels of “parent-child bonding.”

“Empirical studies have shown those are not indicators and that there is no single pathway, or predictable milestones of becoming a terrorist,” German said. “That would make it easy. But it’s actually difficult to determine who is just expressing themselves, and who is going to engage in violence.”

German said in his 16 years at the FBI, some spent as an undercover agent investigating domestic terrorism, traditional police work has shown to be more effective at catching potential terrorists than an individual’s ideological beliefs.

“If you look at their [terrorists’] criminal activity, that often involves precursor crime,” German said.

He explained that police effectively solving violent crimes can also foster trust with the local community, as opposed to CVE programs that are viewed with suspicion due to their past history of surveillance. “CVE usually views them [community] as potential perpetrators, rather than victims of crimes,” German said.

At a summit gathering with the U.S. Department of State and representatives from foreign countries Thursday, U.N. secretary general Ban Ki-moon cautioned against government counter-terrorism strategies that “all too often lack due process and respect for rule of law.”

He urged countries not to use “a sweeping definition of terrorism” that criminalizes groups and individuals who have the right to express their political opinion.