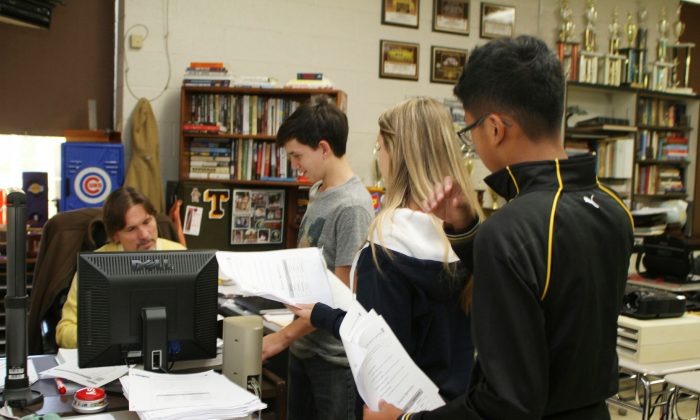 Eighth grade algebra students line up to speak to teacher Mark Olsen in his flipped classroom at Thomaston High School in Thomaston, Conn., on Oct. 9, 2015. The flipped teaching model does just that—flip the order in which students pursue their studies. Rather than hear lessons in class and do homework after school, students watch a lecture featuring new content at home, then work through exercises and projects during class. Thomaston eighth-graders are taught at Thomaston High School. (Laraine Weschler/Republican-American via AP)
Education

WASHINGTON—The vast majority of states now require that teachers be evaluated, at least in part, on student test scores—up sharply from six years ago. And in many states, those performance reviews could lead to a pink slip.

The comprehensive state-by-state analysis released Wednesday by the National Council on Teacher Quality shows 42 states and the District of Columbia have policies on the books requiring that student growth and achievement be considered in evaluations for public school teachers. In 2009, only 15 states linked scores to teacher reviews.

In 28 states, teachers with “ineffective ratings are eligible for dismissal,” said the report by the Washington-based think tank.

A majority of states adopted performance-based teacher evaluations as part of the Obama administration’s Race to the Top initiative, which has awarded $4 billion in grant money to states that promised reforms such as linking test scores to teacher reviews and adopting higher academic standards such as Common Core.

Other states have been pushed to adopt reforms in exchange for administration waivers giving states a pass on some of the requirements of the Bush-era No Child Left Behind education law. More than 40 states have received waivers since 2012.

“The bottom line of teaching is whether or not students are learning,” said Sandi Jacobs, the council’s senior vice president of state and district policy. “If you stand up in front of a classroom every day and deliver great lesson after great lesson but no one in the class is gaining anything, then something is off.”

For 16 states, including Colorado and Connecticut, student growth is the key factor in teacher evaluations.

In Washington D.C., several hundred teachers have been fired since 2009 over poor performance reviews. Test scores made up 35 percent of evaluations for those teaching students in tested grades and subjects. But last year, the D.C. public school system suspended the practice of linking test scores to teacher evaluations while students adjust to new tests based on Common Core standards. The moratorium will be lifted next school year, according to the press secretary for schools Chancellor Kaya Henderson.

The council’s Jacobs says no state considers student achievement as the sole criteria for judging teachers. Other measures, such as classroom observations and student surveys, are considered.

The emphasis on test scores has long been a contentious issue with teachers’ unions and even parents who worry about over-testing.

“Student outcomes should be determined in a far more robust way than mainly using test scores, such as through student grades, projects, other student work and regular observations,” Randi Weingarten, president of the American Federation of Teachers said Wednesday. “Rather than test-and-punish systems, we need teacher evaluations that will help support and improve teaching and learning.”

Parents, too, have registered concern.

A recent Gallup Poll found 55 percent of those questioned opposed linking teacher evaluations to their students’ test scores. Among those with children in public schools opposition was stronger, at 63 percent.

Alabama, New Hampshire and Texas have policies that exist on paper, in the form of waivers granted by the Education Department. But Jacobs says the council’s research turned up little evidence those states are linking teacher ratings to student achievement.

Chris Minnich, executive director of the Council of Chief State School Officers, says most states recognize that how students are doing in the classroom is a critical part of the teacher’s role.

“There were many factors that led to this shift—federal policy, state policy, however, the most basic reason for this shift was to make sure students are at the center of these conversations with teachers,” said Minnich.

According to the report, principals also are getting grades on student performance. The report said 18 states and Washington, D.C. use student growth as the key measure of how well their school chiefs are doing.