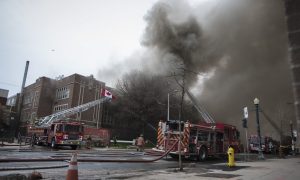 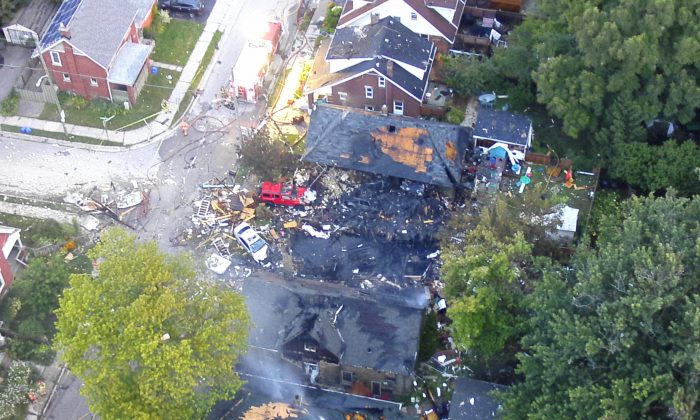 An aerial view of the massive explosion that destroyed several homes in a London, Ont. neighbourhood. (London Police Service)
Canada

Most Residents Allowed Home After House Explosion in London, ON

LONDON, ON—All but 12 of 100 homes evacuated after an explosion in a southwestern Ontario city have been cleared for residents to return.

Seven people were injured Wednesday night after the blast, which was caused by a vehicle slamming into a home and hitting a gas line, police said.

Acting Deputy Fire Chief Jack Burt said the blast had destroyed the home that was hit by the vehicle, noting that the residence was empty at the time.

“There’s a hole in the ground,” he said. “This was a significant explosion.”

Four firefighters, two police officers, and one civilian were taken to hospital, authorities said. One firefighter was in serious condition while the others had minor injuries and were released, they said.

Here’s some of the aftermath of the massive explosion on Woodward Ave last evening. Stark reminder of the dangers of impaired driving! Thankful for our hard working first responders. Prayers for those who were affected / injured. #ivegotyourback911 #ldnont pic.twitter.com/U7q7tji85f

Daniella Alexandra Leis, a 23-year-old woman from Kitchener, ON, was charged with impaired driving in connection with the crash, police said.

The 12 homes not cleared for residents to return were in the area “most significantly impacted,” the city said Thursday night.

For the residents unable to return to their homes, the city said it will continue to provide accommodation if required.

The blaze was largely put out by Thursday afternoon, authorities said.

An incredible response from first responders, & quick-thinking residents in the East end of our City, undoubtedly saved lives this day. Although a devastating loss of property, it is very fortunate no one was more seriously hurt. @LPFFA @MLPS911 @CityofLdnOnt https://t.co/N7gImMdpW9

Brian Magee, who lives a few doors down from where the blast occurred, said he had gone outside with his son just before 11 p.m. the night before after seeing first responders in the area.

“All of a sudden ‘boom’—that’s when the gas line blew,” he said, adding that the force of the blast caused the windows of his home and other nearby residences to shatter.

Magee said he rushed to shield his son from the debris that was scattered across the neighbourhood.

“I just grabbed my son and put him down like a little turtle so it could hit me.”

Magee said he and his family had to leave their home as the fire spread.

“I’m upset. My kids are upset,” he said, adding that the family cat has gone missing.

Excavation is occurring to allow the ⁦@jonpeggOFMEM⁩ investigators access to the area of origin. Thanks to all partners in emergency and community services #teamwork We continue to be grateful for the continued outpouring of support from everyone. #caringcommunity #ldnont pic.twitter.com/l2o7Wue0QO

Keara-Lynn Douglas, who also lives in the neighbourhood, said she felt her house shake when the blast occurred. She said she went outside and saw an orange glow a few blocks away, which prompted her to drive to the scene.

“There was just debris everywhere,” she said. “It was insane.”

Jesse Helmer, a city councillor who lives in the area, said he initially thought a tree fell on his house.

“I went outside and saw a huge plume of smoke and fire going up into the sky,” he said.

A community centre was opened for displaced residents and other residents have dropped off food and water, he said.

“It’s important that we get together as a community,” said Helmer. “Everyone is really coming together to put up some donations and things that people will need because some of these people have lost everything.”