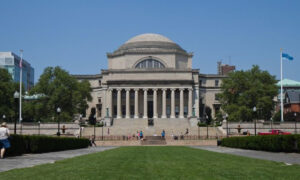 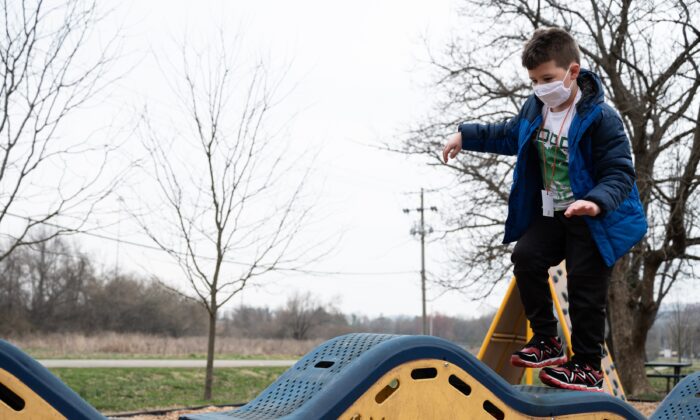 A masked student performs a balancing exercise during recess on the playground of Medora Elementary School in Louisville, Ky., on March 17, 2021. (Jon Cherry/Getty Images)
Health Education

The majority of parents of K–12 students want schools to reopen, with Republicans overwhelmingly in favor and most Democrats and independents agreeing, according to a recently released poll.

Some 94 percent of Republican respondents to a Gallup survey of parents said they support providing in-person schooling to K–12 students. They were joined by 80 percent of independents and 62 percent of Democrats.

Parents who were working were particularly supportive of reopening schools for in-person instruction. Among that group, 82 percent want schools to reopen, versus 71 percent of those who were not working.

The findings are from Gallup’s COVID-19 probability-based web panel survey, which was conducted between Feb. 14 and Feb. 21. The random sample included 860 adults with K–12 students. The margin of sampling error was plus/minus 5 percentage points.

The survey was conducted shortly after the Centers for Disease Control and Prevention (CDC) released updated guidance on how schools should go about reopening.

Some critics, including researchers whose research the agency used, said the CDC’s recommendations were too strict. In one example, the CDC said six feet of social distancing should be maintained whenever possible, even though its director had last year told her local school district that three feet was sufficient.

More schools have been reopening in recent weeks. Nearly half of American K–12 students were in “traditional” five-day-a-week, in-person instruction as of March 14, according to research-tracking organization Burbio.

Another 30 percent were attending “hybrid” schools, where students attend in-person but not every day of the week.

Secretary of Education Miguel Cardona told reporters in Washington on March 17 that he is convening a National Reopening Summit next week.

Officials will be hearing about the “best practices from across the country on how to do this safely and how to do it quickly, because we know there are great examples out there,” he said.

“As a parent and as an educator, I know the value of in-person learning. And for those of you that are parents here, you know there’s no substitute for in-person learning. So I’m excited to get to work making sure we can safely reopen our schools as quickly as possible.”