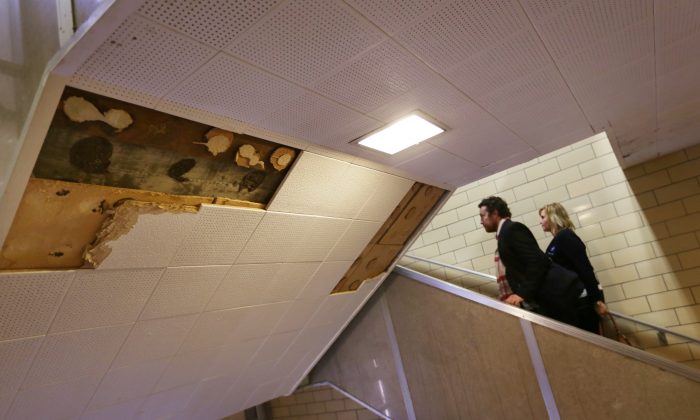 In this photo taken Thursday, Jan. 14, 2016, Pam Barnes, right and Asher Huey, of the American Federation of Teachers, walk by some missing ceiling tiles while touring Osborn Collegiate Academy of Mathematics Science and Technology in Detroit, to look at some of the poor conditions that have prompted sickouts by Detroit Public School teachers.(Romain Blanquart/Detroit Free Press via AP)
US

Most of Detroit’s Public Schools Close Amid Teacher Sick-Out

DETROIT—Most of Detroit’s public schools closed for the day on Wednesday due to teacher absences, as disgruntled educators stepped up efforts to protest the governor’s plans for the district, its ramshackle finances and dilapidated buildings.

Detroit Public Schools said more than 85 of its roughly 100 schools were shut. On Tuesday night, a group advocating for change at city schools known as Detroit Teachers Strike to Win warned of closures and said protests were planned Wednesday.

On Tuesday night, Gov. Rick Snyder again pushed state lawmakers to pass bills to overhaul the school district by splitting it in two, spending more than $700 million over a decade, warning of a potential bankruptcy. Already, the district is run by an emergency manager appointed by the Republican governor.

Teacher and activist Steve Conn said in a statement that Snyder is “attacking public education in Detroit.”

The closings also come the same day that President Barack Obama plans to visit Detroit with a tour of the North American International Auto Show to highlight progress in the city and the auto industry. A rally and picket by teachers is planned outside downtown’s Cobo Center, where the tour will take place.

In Detroit, schools have been left to crumble. Watch this heartbreaking video, then sign our petition to fully and fairly fund Detroit schools.

Posted by AFT – American Federation of Teachers on Friday, January 15, 2016

The district said it has no choice but to close schools when teachers don’t report to work. It said those who don’t call in sick still were required to report to their buildings Wednesday.

Detroit has about 46,000 students. More than 60 schools were closed Jan. 11 because of an absence of teachers. Other sick-outs affecting a smaller number of schools have taken place. In response, city officials have started inspecting schools for possible code and safety violations.