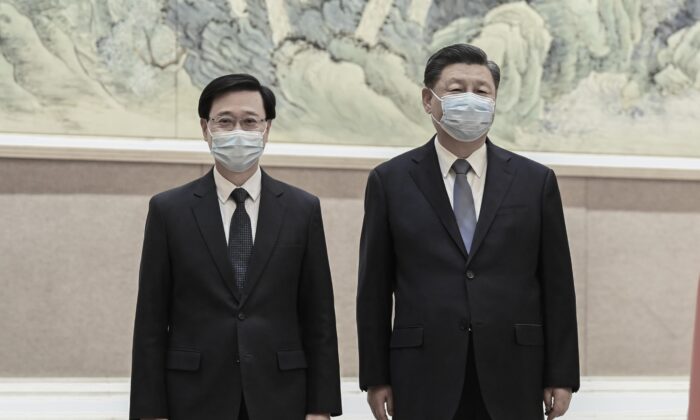 Chinese leader Xi Jinping (R) and Hong Kong Chief Executive-elect John Lee pose for a photo before their meeting in Beijing, China, on May 30, 2022. (Li Xueren/Xinhua via AP)
Hong Kong

Hong Kong’s new chief executive John Lee met with the president and editor-in-chief of the China Media Group (CMG) on July 1. Meanwhile, numerous other media organizations were denied access to cover Chinese leader Xi Jinping’s visit to the former British colony on the 25th anniversary of its handover to China.

At Government House, John Lee met and thanked Shen Haixiong, the president and editor-in-chief of the CMG and the Vice Minister of China’s Publicity Department of the Central Committee.

CMG, China’s predominant state media organization, is widely known as the Propaganda Department of the Chinese Communist Party (CCP). It is responsible for enforcing media censorship.

Two days prior, at least three other media organizations were disqualified from covering the historical anniversary event without notice, despite Lee saying in his inaugural speech that his team will “strive to build a more caring and inclusive Hong Kong filled with vibrancy, hope, and development opportunities.”

On June 29, the journalists of Hong Kong 01, Hong Kong Economic Times, and TVB News found themselves unable to check in upon arrival at the designated isolation hotel.

Prior to that rejection, the Information Services Department (ISD) had cited “security concerns,” when they informed an extended list of journalists attending the events on June 28 that they were required to provide daily negative COVID-19 test results from June 26.

The suddenly-imposed requirement appears to be aimed at blocking certain media organizations from attending the events as most journalists could not provide daily COVID-19 test results dated before the requirement was announced.

In addition, some media weren’t even allowed to sign up to cover the event, including Hong Kong In-media, Hong Kong Free Press, the Japanese Asahi Shimbun, Taiwan’s Central News Agency, and the Voice of America.

HKJA Chairman Ronald Chan said that he could not understand the logic and standards behind these arrangements.

Regarding press freedom, Hong Kong is now ranked in the bottom 20 percent globally.

According to Reporters Without Borders (RSF), an international journalism watchdog, Hong Kong’s press freedom ranking has plummeted from 80 in 2021 to 148 in 2022 (out of 180 counties and territories) in the World Press Freedom Index.

“Once a bastion of press freedom, [Hong Kong] has seen an unprecedented setback since 2020 when Beijing adopted a National Security Law aimed at silencing independent voices,” RSF stated.

The city’s worsened media freedom is reflected by the membership status of the Hong Kong Journalists Association (HKJA).

“Most Hongkongers will know there’s a risk to be the chairman of HKJA,” Ronald Chan said after being re-elected as HKJA chairman.

In 2002, Hong Kong, the then British colony, was ranked 18 on the World Press Freedom Index, compared to the current 148th position.

China remains one of the worst, ranking 175 out of 180, the same ranking it had in 2002 when the ranking first started.

“China is the world’s largest prison for journalists, and its regime conducts a campaign of repression against journalism and the right to information worldwide,” RSF said.

“The Propaganda Department of the Chinese Communist Party sends a detailed notice to all media every day that includes editorial guidelines and censored topics. The state-owned China Global Television Network (CGTN) and Radio China International (RCI) spread the regime’s propaganda all around the world.”

Many media have been denied access to cover the city’s 25th anniversary event citing “security concerns.”

However, Ying Cheung, a former assistant professor at the Hong Kong Polytechnic University (PolyU), told The Epoch Times on June 29 that the city certainly has “no significant security issues.”

Hong Kong has implemented heightened security measures for Chinese leader Xi Jinping’s visit to the city on June 30 and July 1.

On top of road closures and traffic controls, small unmanned aircraft have been banned throughout Hong Kong during the visit.

Pro-democracy groups were also summoned by the national security police and told to not hold any protest on the 25th anniversary of the city’s handover.