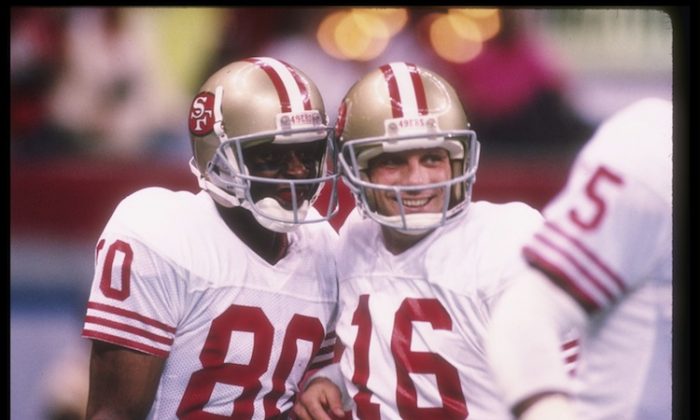 After Jerry Rice (L) and Joe Montana (R) put on a show in Super Bowl XXIV, the only suspense in the second half was which of the two would win MVP honors. (Rick Stewart/Getty Images)
NFL

Most Lopsided Super Bowls in History

The Giants thrilling 21–17 Super Bowl win last Sunday was one of the most hotly-contested Super Bowls in history. The tight contest is just one of a number of close Super Bowls lately—a change from the ’80s and ’90s when the NFC routinely dominated the best of the AFC in what turned out to be anti-climactic affairs.

Here are the 10 most-lopsided Super Bowls in terms of how soon the game was over and how bad the overall discrepancy was:

10. Super Bowl XXXV; Baltimore Ravens 34, New York Giants 7, MVP: Ray Lewis (3 tackles, 2 assists and 4 passes defensed)—The Giants were a surprise just to make it this far, but still had to be disappointed in their showing. The Ravens’ defense, led by defensive player of the year Ray Lewis, allowed an average of just 10.3 points per game in the regular season (best in the NFL since ’77) and were even better in the Super Bowl. New York’s offense didn’t score a point (touchdown was from kickoff return) while quarterback Kerry Collins finished a dismal 15/39 passing, for 112 yards, and 4 interceptions.

8. Super Bowl XI; Oakland Raiders 32, Minnesota Vikings 14, MVP: Fred Biletnikoff (4 catches, 79 yards receiving)—Minnesota went to four Super Bowls in eight seasons and lost them all. Though the Bills of the 90’s would eventually surpass them in the heartbreak department, this would be the Vikings last and most disheartening defeat of them all. Minnesota didn’t score the entire first half and just before Vikings backup quarterback Bob Lee connected for a touchdown pass it was 32–7. Oakland running back Clarence Davis ran wild on Minnesota’s defense to the tune of 137 yards on just 16 carries.

7. Super Bowl XIX; San Francisco 49ers 38, Miami Dolphins 16, MVP: Joe Montana (24/35 passing, 331 yards, 3 TDs, 59 yards rushing, 1 rushing TD)—Montana’s performance earned him the second of three Super Bowl MVP awards, but his team’s defense was nearly as good. The Niners held Miami’s Dan Marino, who threw for an NFL-record 5,084 yards that season, to a season-worst 66.9 quarterback rating as he completed a very average 58% of his passes and was picked off twice. Meanwhile, Montana and the offense put up 21 second-quarter points to take a 28–16 lead into halftime and scored 10 more in the third to put the game on ice.

6. Super Bowl XVIII; Los Angeles Raiders 38, Washington Redskins 9, MVP: Marcus Allen (20 carries, 191 yards rushing, 2 TDs)—The only Super Bowl Washington coach Joe Gibbs ever lost was this one and his team was never really in it. The defending champion Redskins were already down 21–3 at the half, thanks to a pair of defensive scores, when Raiders running back Marcus Allen took over. The future Hall-of-Famer scored a pair of rushing touchdowns in the third quarter—including a 74-yarder—to put the game well out of reach.