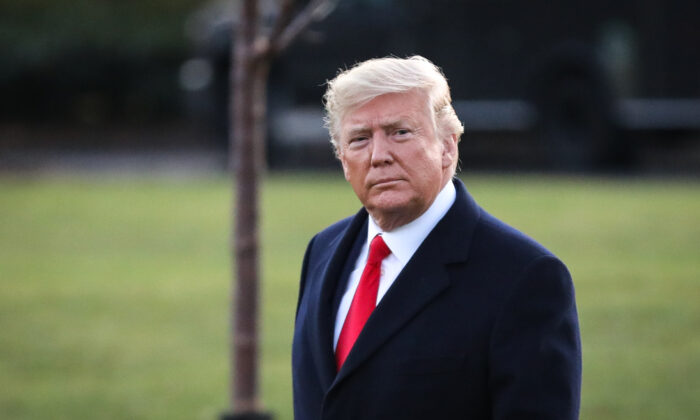 President Donald Trump walks on the South Lawn to board Marine One at the White House in Washington on Dec. 18, 2019. (Charlotte Cuthbertson/The Epoch Times)
Politics

Seventy-three percent of respondents just before Christmas said they think it’s “unlikely” or “not at all likely” that two-thirds of the Senate will vote to convict President Donald Trump on either of the two impeachment charges approved by House Democrats.

“Three-out-of-four voters (73 percent) say Trump is unlikely to be forced out of the presidency, with 47 percent who feel it’s ‘not at all likely,’” according to Rasmussen Reports, which interviewed 1,000 likely voters on Dec. 22 and 23.

The margin of error is plus or minus 3 percentage points, with a 95 percent confidence level. Surveys of likely voters are typically considered more accurate than polls based on registered voters or adults.

“Sixty percent of Democrats see Trump’s removal from office as unlikely, although that compares to 81 percent of Republicans and 78 percent of voters not affiliated with either major political party,” Rasmussen said.

Even among voters who strongly disapprove of Trump’s job performance since he upset former Secretary of State Hillary Clinton in the 2016 presidential election, only 28 percent expect him to be removed from office by the Senate.

Party loyalty among congressional Republicans is seen among most Democrats (69 percent) as the biggest obstacle to that outcome, according to Rasmussen. But an almost identical 67 percent of Republicans told Rasmussen that “the bigger roadblock is a lack of convincing evidence” supporting the House case for impeachment.

Younger voters are significantly more likely to expect a Trump conviction, with slightly less than half of blacks, 47 percent, seeing that outcome as likely, according to Rasmussen. Only 17 percent of whites and 33 percent of other minorities think the president’s removal is likely.

Overall, support for the House impeachment votes in the survey was 48 percent, compared to 46 percent who opposed the votes.

In a related Rasmussen survey of 1,000 likely voters conducted Dec. 18 and 19, Trump appeared to be winning the public debate about the legitimacy of the House Democrats’ impeachment drive.

Fifty-one percent of the respondents agreed with the statement that “this impeachment represents an unprecedented and unconstitutional abuse of power by Democrat lawmakers unequaled in nearly two-and-a-half centuries of American legislative history.”

Forty percent of the respondents disagreed with the statement, which was taken from Trump’s Dec. 17 letter to Speaker of the House Nancy Pelosi (D-Calif.).

Rasmussen didn’t tell respondents that Trump and Pelosi were the sources for the quotes.

Jim Manley, former communications director for then-Senate Majority Leader Harry Reid (D-Nev.), told The Epoch Times on Dec. 30 that “the fact there are doubts out there will have no impact on the Senate.”

Americans for Limited Government President Richard Manning told The Epoch Times that the Rasmussen survey “confirms what most people know anecdotally about impeachment, it is highly partisan and both sides believe the other is wearing political blinders.”

The most surprising result in the survey is the “astonishing revelation” that “27 percent of the American public believes that President Trump is likely to be convicted,” Manning said.

He said the 27 percent is “likely their most ardent presidential caucus and primary voters, which explains why their contenders continue to lurch to the left, abandoning any pretense of caring about the former base of their party, the blue-collar worker.”