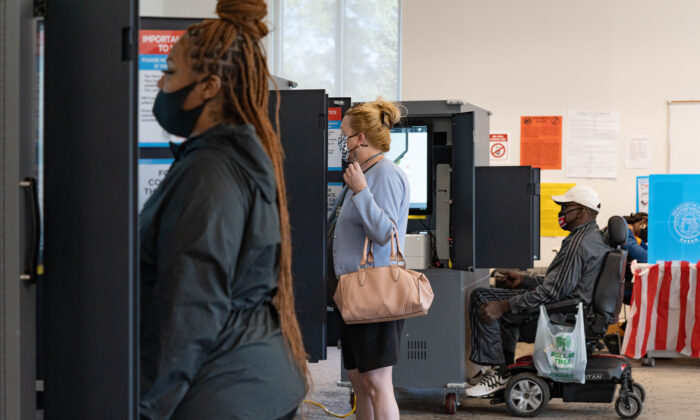 A majority of voters in Georgia either didn’t check or only briefly glanced at paper ballots after they chose who to vote for during the 2020 election, according to a recently released study.

A fifth of voters observed at the voting booth didn’t check the ballots at all, while 31.3 percent of others only gave the paper a brief glance. The rest either looked at the ballots for a short time or a long time, according to the study (pdf).

Under the election system produced by Dominion Voting Systems and used in Georgia for the first time statewide in 2020, voters log their choices on electronic machines. When they finish picking who they’re voting for, a printer attached to the machine prints out a paper ballot.

People take the ballots and insert them into a ballot tabulator.

Before doing so, voters can check the ballot for accuracy. If there’s something amiss, they can spoil their ballot and vote again.

Researchers with the University of Georgia’s School of Public & International Affairs sought to see how many voters would check their ballots during the presidential election and paid undergraduate and graduate students from the school to serve as field observers at various precincts to observe firsthand.

The results, showing that most voters either didn’t check their ballot or only undertook a cursory examination that was deemed insufficient, indicates “room for improvement,” M.V. Hood III, a professor in the Department of Political Science at the University of Georgia who helped run the study, told The Epoch Times.

Ways to improve the rate at which voters check the paper ballots include training poll workers to remind them verbally to do so and having the workers hand out reminders.

Voters who were handed such reminders were 5.3 percent more likely to have checked their ballots compared to those who did not, according to an embedded experiment researchers did at several precincts.

The study, dated Jan. 22, was initially obtained and published by the Atlanta Journal-Constitution.

The importance of checking one’s vote is that the paper ballot could, for various reasons, be different than the votes that had been entered on the machine.

“It gives peace of mind with someone that the choices that they’ve made on the tabulator are correctly recorded on the ballot,” Hood said. “And those would be the choices that would be counted again under certain types of situations,” such as hand recounts.

Georgia was one of several swing states that went to Democrat Joe Biden in 2020, helping him defeat former President Donald Trump. The results remained the same after three recounts, and state officials have said no widespread fraud occurred. A group of voters, however, is seeking to look at absentee ballots counted in Fulton County, the state’s largest, last year. The group alleges that a troubling amount of fraud did take place.

Richard DeMillo, chairman of Georgia Tech’s School of Cybersecurity and Privacy, said the newly published research highlights the risk of the use of ballot marking devices.

DeMillo envisioned a scenario in which an adversary changed up to 10 percent of the ballots in a 1,000-voter precinct. Extrapolating from the study results, that would mean it would be almost certain that all of those ballots would be cast unnoticed, he said on Twitter.

“Half of the ballots are never checked at all. Half of the ones that are checked are mistakenly verified as valid. Seven percent of voters who notice cheating report it to a poll worker. At best, there will be a lone hacked ballot reported to a poll worker and not placed in the ballot box to be counted. But a single report of a changed ballot is not enough to shut down the voting (otherwise, adversaries could easily mount a denial of service attack), which means that the other 99 incorrect ballots will be counted along with all the other correct ballots,” he said.

The rest live in jurisdictions that use hand-marked paper ballots.

A grant from the Center for Election Innovation & Research funded the study on ballot checks. Researchers aren’t sure if they’ll study the matter more in the future.

If similar studies are done in the future, the figures from the study will act as baseline numbers, Hood said.

Georgia Secretary of State Brad Raffensperger, a Republican whose office said he requested the research, told The Epoch Times via email that the study “shows voters do indeed review their ballots for accuracy before casting them, demonstrating once and for all that Georgia’s system of touchscreen ballot printing is both accurate and easy for voters to use.”

“Millions of voters checking the accuracy of their ballots is proof the votes that were counted were for the candidates the voters intended,” he said.