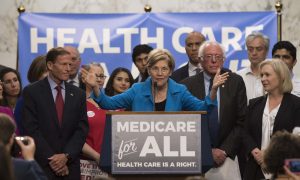 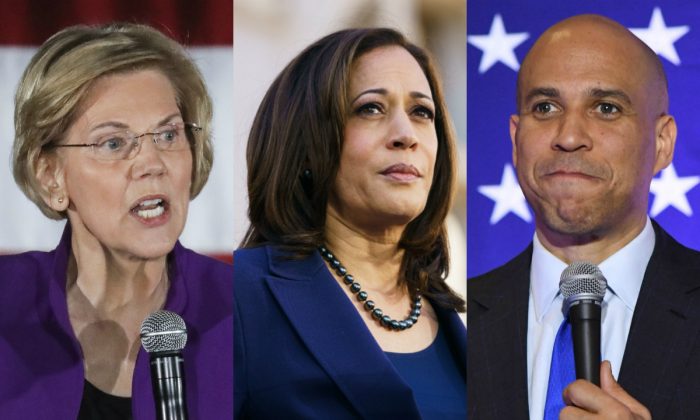 Most Democratic 2020 Candidates Reject Socialist Label But Back Socialist Agenda

As President Donald Trump and his allies ramp up criticism of socialism, most of the Democrats running for president in 2020 are going out of their way to clarify that they are not socialists. But despite distancing themselves from the label, at least four of the leading candidates are running on platforms largely consisting of socialist policies.

A March 3 poll by The Wall Street Journal and NBC News shows that less than one in five Americans view socialism in a positive light, making the socialist affiliation political suicide. Despite that, running for president on a platform consisting of socialist policies still appears to be a safe bet, with five of the leading 2020 Democratic candidates having co-sponsored the “Medicare for All” bill by socialist Sen. Bernie Sanders (I-Vt.) and the “Green New Deal” resolution by socialist Rep. Alexandria Ocasio-Cortez (D-N.Y.).

Of the five, all but Sanders have officially rejected the socialist label. None are on the record describing “Medicare for All” and the “Green New Deal” as socialist policies even though both measures rely on government expansion, wealth redistribution through heavy taxation, and state encroachment on private property and enterprise.

In an interview aired on March 10, Warren told CBS that “it’s just wrong” to label her as a socialist. Booker and Gillibrand are, likewise, not calling themselves socialists, and Harris said during a campaign stop in New Hampshire on Feb. 18 that she is “not a democratic socialist.”

While Sanders and Ocasio-Cortez describe themselves as “democratic socialists,” there is little distinction between “democratic socialism” and “socialism” in the literature of Democratic Socialists of America (DSA), the group both are affiliated with. The group’s constitution describes its members as socialists who “reject an economic order based on private profit.” The group backs both Medicare for All and the Green New Deal. DSA is allied with the Communist Party USA, which also backs the Green New Deal and Medicare for All.

Polling indicates why the Democratic 2020 candidates running on socialist policies won’t call themselves socialists. Many polls have shown that the majority of Americans reject socialism, but show strong support for socialist policies because neither polls nor politicians provide much detail about the policies beyond sweet-sounding labels like “Medicare for All” and “free universal health care.” As a result, while 63 percent of Americans don’t want to live in a socialist country, 66 percent believe the government should provide free universal health care, a purely socialist policy.

“[The Democratic candidates] are playing a very delicate game because they have to appeal to their progressive socialist base, the people who get out and campaign for them, but they also don’t want to frighten middle America into the hands of the Republicans,” said author and Epoch Times contributor Trevor Loudon, who has spent 30 years researching radical left, Marxist, and terrorist movements.

“They know enough to say the right words to middle America so as to not frighten them, but to promote the exact same policies that have been promoted by the Communist Party USA and the Democratic Socialists of America, which are both Marxist-communist groups.”

In an example of how people react to socialist policies once they learn more about them, only 13 percent of Americans told Harris in February that they would support “Medicare for All” if it meant the end of private health insurance. In its current form, Medicare for All would eliminate the private health insurance industry with niche exceptions for covering procedures like cosmetic surgery.

Another study, conducted by the Kaiser Family Foundation, showed that support for Medicare for All dropped from 62 percent to 44 percent once the policy is described as “socialized medicine.”

Another fact seldom mentioned by proponents of socialist policies is the cost of programs such as Medicare for All, which is estimated at up to $32 trillion over 10 years, according to an independent assessment by the left-leaning Urban Institute. The Green New Deal’s 10-year mobilization could cost up to $93 trillion, according to an assessment by the center-right American Action Forum.

The universal healthcare goal of Medicare for All is part of the Green New Deal.

For a sense of scale, the combined $93 trillion cost for 10 years of the Green New Deal dwarfs the current $60 trillion projection for all government spending over the next decade. The astronomical costs of these socialist programs would fall on the shoulders of American taxpayers. The Green New Deal could cost up to $650,000 per household.

Ocasio-Cortez suggested that the Federal Reserve issue credit to cover the costs. Sanders, Harris, Booker, Warren, and Gillibrand will need to provide voters with a better plan than merely printing more money.

Trump appears well aware of the socialist agendas of the Democratic 2020 candidates. The president said on March 11 that socialism is easy to campaign on, but leads to empty promises.

“When you tell people free medical, free education, no more student loans—all of the different things that you say—it’s a great thing to campaign on, but then, 10 years later, the country is down the tubes. It’s gone,” Trump said.

“So, you always have to be careful with it, because you know you talk about single-payer, it sounds very seductive,” he added. “But it means you’re not going to have good healthcare, it means the country is not going to be able to afford it.”

Since taking office, Trump has lambasted socialism and communism on the world stage. His criticism of socialism shifted to the domestic front this year. At the State of the Union address, the president said that “America will never be a socialist country.”

Vice President Mike Pence followed with a major speech opposing socialism at the annual Conservative Political Action Conference, telling the audience that in 2020 Americans will be choosing between “freedom and socialism.”

To the conservatives gathered, the message was particularly poignant. The Green New Deal calls for massive government expansion into energy, housing, farming, transportation, and other industries. The resolution also calls for the removal of all gas-engine cars in favor of electric vehicles and the refurbishment or replacement of every building in America, an encroachment on private property unprecedented in American history. If implemented in its current form, Medicare for All would hand government officials a monopoly over the healthcare industry.

Shortly after Sanders entered the 2020 race, the Trump campaign pointed out in a statement that “Sanders has already won the debate in the Democrat primary because every candidate is embracing his brand of socialism.”

“But the American people will reject an agenda of sky-high tax rates, government-run health care, and coddling dictators like those in Venezuela,” Trump campaign spokeswoman Kayleigh McEnany said.

Correction: this article has been updated to reflect that universal healthcare is part of the Green New Deal proposal. The associated projected costs have been updated accordingly.