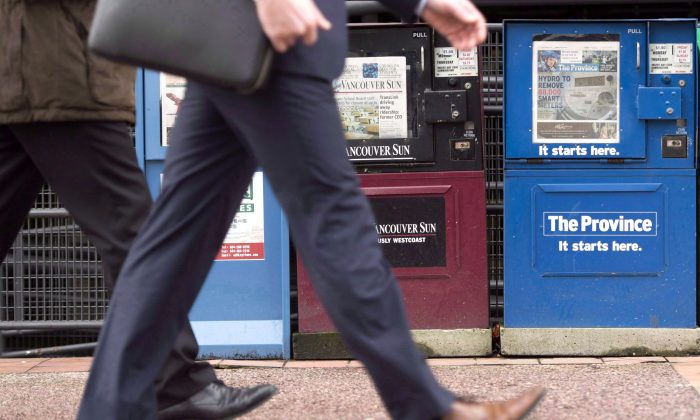 Pedestrians pass newspaper boxes in downtown Vancouver. The “narrowing of the window of public opinion” in today’s media is a dangerous thing, says author and historian Gerry Bowler. (The Canadian Press/Jonathan Hayward)
Canada

The majority of Canadian news outlets have a left-leaning bias and do not include enough variety or conservative voices, according to a Canadian author and historian.

Gerry Bowler, who taught history at the University of Manitoba for 25 years, is a senior fellow at the Frontier Centre for Public Policy, a think tank that lobbies for smaller government.

Bowler recently zeroed in on news coverage in North America, suggesting it has gotten so biased toward supporting a progressive or leftist agenda that certain issues such as gay marriage, global warming, abortion, and gun control typically do not contain a conservative viewpoint.

“There’s a lot of Canadian life that is invisible to the media and there is a lot that is highlighted that just happens to fit the progressive agenda,” he said.

“And that narrowing of the window of public opinion is very dangerous, whether the drift is to the right or to the left, as it is in North America in the 21st century.”

Bowler said people who possess left-wing values tend to gravitate to the media as a profession—from reporters to editors to managers—and they have a tendency to give a progressive perspective while rushing from one story to the next, leaving out a diverse mix of opinions and analysis.

“The media figures would never admit out loud to being biased. As far as they are concerned they are straight-down-the-middle objective reporters of reality,” he said.

Bowler points to a recent Gallup poll in the United States that finds 62 percent of Democrats say they trust the media whereas only 14 percent of Republicans found the media to be objective.

He argues the situation is much the same in Canada, where conservatives feel alienated due to the kind of news coverage that gives more airtime to progressive voices favouring political correctness while stigmatizing religious or conservative views.

“Just look at the coverage in Canada of the American election as the results came in,” he said. “The CBC was absolutely disgraceful with its coverage—they were openly weeping at the results and there was no intent at objectivity at all,” said Bowler, adding that the only conservative voice on a panel dissecting the election results was David Frum, a known critic of President Donald Trump.

Conservatives are known to target the CBC because it’s a large, publicly funded institution, and Bowler and the Frontier Centre have often also focused on the state broadcaster. The CBC is not fulfilling its prime duty to reflect all Canadians and rather has become more of “a cheerleader for the left,” Bowler said.

“I love the CBC but it does not represent the whole Canadian spectrum. It’s very much a left-wing organization.”

The Epoch Times contacted the CBC for comment and received a statement by email from Jack Nagler, director of Journalistic Public Accountability and Engagement.

“Stories don’t simply get written, then immediately broadcast or published. Instead, there’s a rigorous editing process that includes the checks and balances we need to prevent any one person’s biases from shaping our content,” Nagler writes.

“We are scrupulous about making sure that we reflect a variety of perspectives on issues—especially those that are complicated and contentious. We recognize that our job is not to declare heroes and villains—it is to give people information and context so they can draw their own conclusions about the issues we cover.”

Nagler also noted the CBC embraces the idea of accountability by having an independent ombudsman that accepts complaints from the public and reviews all journalistic standards and practices on a regular basis to ensure no biases are slipping into the news coverage.

‘Bias is in the eye of the beholder’

Media experts say it remains crucially important that news organizations prove to the public they have nothing to hide and are holding themselves accountable along the entire course of news reporting.

“I think we are at a time now where we need new definitions of what constitutes as reliable information,” said Jeffrey Dvorkin, director of the journalism program at the University of Toronto Scarborough Campus.

“And I think there’s an obligation for all media organizations to be more transparent about where they get their information from, how independent they are, and how accountable they are to the public.”

Dvorkin was the former managing editor for CBC Radio and worked with National Public Radio in Washington, D.C. He also was NPR’s first news ombudsman and co-authored the Ethics Guide for Public Broadcasters for the Corporation for Public Broadcasting.

In his years of work in journalism, he said he never met a single reporter who let their political beliefs interrupt their professional careers, and it’s simply unfair to portray all journalists as biased.

“Bias is in the eye of the beholder,” he said. “People today tend to seek out information that reinforces their own positions. Social media has allowed for a proliferation of other points of view, and news organizations have come under heavy criticism.”

“Conservatives know what buttons to push to get journalists, especially, crouching against these accusations of bias, and I think it’s nonsense,” he added.

However, both Dvorkin and Bowler agree that in today’s age of endless information it is incumbent upon the individual to consume a wide range of news sources and use critical thinking skills to discern how accurate the information is and where it is coming from.