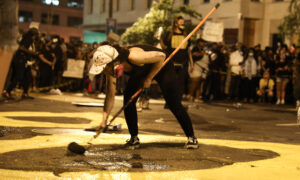 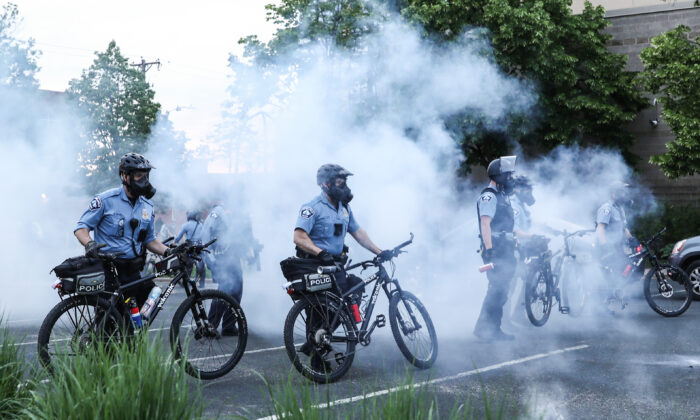 Police officers deploy tear gas and pepper spray to corral protesters before detaining them during the sixth night of protests and violence following the death of George Floyd, in Minneapolis, Minn., on May 31, 2020. (Charlotte Cuthbertson/The Epoch Times)
US News

Most Americans don’t agree with the “defund the police” movement, according to recent polls.

Nearly two-thirds, or 64 percent, said they oppose the movement in a new Ipsos poll commissioned by ABC News. Thirty-four percent said they support the movement while slightly more, 39 percent, support reducing the budget of their local police departments if the money is redirected to programs related to mental health, housing, and education.

About nine in 10 Republican respondents oppose defunding the police. A majority of Democrats support the movement.

Among races, support for defunding the police was low for whites, higher for Hispanics, and reached a majority in blacks.

A separate Ipsos poll conducted on behalf of Reuters found majority opposition to the “defund the police” movement, including strong opposition by 40 percent of respondents.

Thirty-nine percent of respondents said they strongly or somewhat support the movement. Four percent said they’re not sure.

A survey late last month carried out by YouGov for Yahoo News found that 65 percent of respondents opposed cutting funding for police departments, with just 16 percent supporting funding cuts. The other 19 percent weren’t sure.

Calls to defund the police have drawn widespread opposition from lawmakers in both parties.

The calls were sparked by the death of George Floyd, a black man accused of forgery who died in police custody on Memorial Day in Minneapolis.

The ABC/Ipsos poll was conducted among 686 people from June 1o to June 11. It has a sampling error of plus/minus 4.2 percentage points.

The Reuters/Ipsos poll was conducted among 1,113 Americans 18 or older between June 9 and June 10. It has a margin of error of plus.minus 3.3 percentage points.

The Yahoo/YouGov survey was conducted among 1,060 U.S. adults from May 29 to May 30. The margin of error was plus/minus 4.3 percentage points.