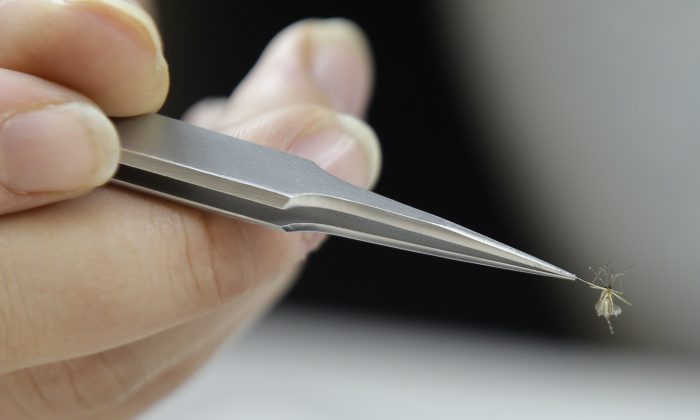 MIAMI—Florida mosquito control officials worry they won’t be able to keep up their efforts to contain the bugs that carry Zika without federal funding, even as concern mounts that the first mosquito-borne case in the U.S. is near.

On Thursday, fogging trucks drove through a Miami-Dade County neighborhood where health officials are investigating a Zika diagnosis that doesn’t appear to have connection to travel outside the United States. Zika is usually spread by mosquitoes, but nearly all the Zika cases in the U.S. have been contracted in other countries or through sex with someone who got it abroad.

“We want to make sure we reduce the mosquito population down to zero if possible in this case,” said Chalmers Vasquez, Miami-Dade County’s mosquito control operations manager.

Florida Mosquitoes Being Tested for Zika to Confirm Case

Vasquez’s inspectors are going door-to-door, trapping mosquitoes for testing, hand-spraying and removing the standing water where they breed. Such aggressive mosquito control and surveillance is now routine in Miami-Dade County, which leads Florida in confirmed Zika cases linked to travel.

The Florida Department of Health announced Thursday that another Zika case potentially not related to travel was being investigated in Broward County.

While Zika’s appearance in mosquitoes in the U.S. mainland is likely, health officials don’t expect widespread outbreaks like those seen in Latin America and the Caribbean. Zika is such a mild disease for most people that they don’t even know they have it, but it has been found to lead to severe birth defects if a pregnant woman is infected.

The tropical mosquito that carries Zika, Aedes aegypti, likes to live near people and it doesn’t travel far. Better building construction, more extensive use of air conditioning and window screens, wider use of bug repellant and broader mosquito control measures will help control the spread of Zika by mosquitoes in the U.S., experts believe. The same mosquito also has brought dengue and chikungunya to Florida and the Texas-Mexico border, but only in small clusters of cases.

Still, even suspected cases trigger costly responses, as inspectors sweep areas to eliminate their breeding sites, set traps and kill any mosquitoes they see. “We try to get access to every backyard we can,” Vasquez said.

No mosquitoes collected in Miami-Dade County so far have tested positive for Zika or other viruses carried by the same species, according to state and county officials.

Florida has received more than $2 million in Zika-specific funding from the U.S. Centers for Disease Control and Prevention, and the White House has said the state can anticipate receiving another $5.6 million in Zika funding through a grant this week.

But the state hasn’t been able to fill most of the $15 million in emergency Zika funding requests, and Congress left on a seven-week vacation without giving the Obama administration any of the $1.9 billion it sought to battle Zika.

Florida’s mosquito control districts can respond to Zika infections for now, but doing so burns up budgets for longer-term threats.

Volusia County has confirmed only three travel-related Zika cases, but responding to each one cost $9,000 to $24,000, depending on local conditions, said Jim McNelly, director of mosquito control in the Atlantic coast county.

In Medical Mystery, Caregiver Gets Zika From Man Who Died

“If you multiply the cases we’ve had to date with the potential cases, we’ve already spent $50,000 to $60,000 this year. That’s money we didn’t budget for,” McNelly said. “We treat a potential case just like a confirmed case. It’s the truck, it’s the gas, it’s the chemicals, it’s the whole shooting match.”

The Collier Mosquito Control District could have used federal funding to intensify its virus surveillance and might not have needed to spend about $70,000 budgeted for insecticides on laboratory upgrades instead, executive director Patrick Linn said.

“This allows us to test in-house,” Linn said. “We just have to go with a little lower inventory with some of our chemicals used for treating mosquitoes.”

The CDC has come up with nearly $60 million to divide between states and territories for local Zika efforts, but its officials also stressed that more money is crucial to expand mosquito-control efforts, improve the ability to quickly diagnose Zika and develop a vaccine.

“The way you prevent a locally transmitted case from becoming sustained and disseminated is good mosquito control,” said Dr. Anthony Fauci, director of the National Institute of Allergy and Infectious Diseases, last week. “The CDC needs the money yesterday.”