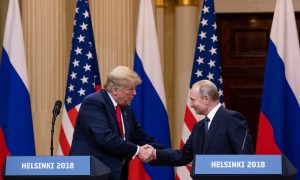 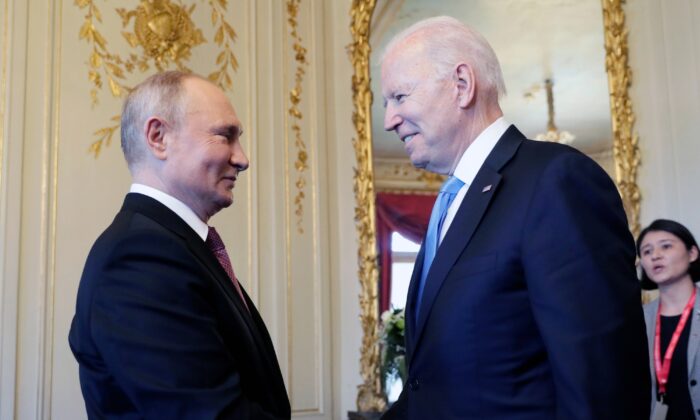 Moscow’s Controversial Stance on Beijing: Is US a ‘Wedge’ Between Russia and China?

Dusya Parkova
Dusya Parkova has worked as a contributing writer and a journalist for various international media, covering the energy sector, business, and investments, with articles published in Oil and Gas Eurasia, The Moscow Times, Oilprice.com, and others. She holds an MBA in Management, has a business acumen, and extensive work experience in business administration and logistics.
View profile
Follow
and Alexander Bratersky

Alexander Bratersky
Alexander Bratersky is the Russia correspondent at Defense News. He has covered U.S.–Russian relations, NATO and Middle Eastern affairs, and Russian policy in Syria. He previously worked at the Moscow Times and Izvestia as a political reporter, as well as RIA Novosti as a Washington correspondent. He also dabbles in stand-up comedy.
View profile
Follow
biggersmaller
Print

While China was not part of official discussions between the two leaders, it was not ignored by both pro-Kremlin and liberal Russian media who analyzed the meeting.

He was echoed by the liberal-leaning Nezavisimaya Gazeta: “…the grand American strategy is aimed at a systemic, comprehensive and lasting containment of China. For the success of this strategy, it is fundamentally important to prevent an allied rapprochement between Beijing and Moscow.”

The paper made the point in a post-summit editorial titled “Biden and Putin started the game. Quite possibly a great game.”

The nature and aim of the big game are still unclear, but some Russian experts agree that Washington is giving Moscow a ”break of a sort” as the United States is more concerned about the rise of China’s military than with Kremlin authoritarian policy.

The White House, during the tenure of President Donald Trump, called both Russia and China two “revisionist” powers in the 2017 national security strategy, but is now looking for ways to change that approach.

It was highlighted in Russian media that the NBC interview with President Putin on the eve of the summit included questions on China’s possible military “threat to Russia.”

While responding to NBC reporter Keir Simmons’ question about Russia’s possible concern with China’s militarization, Putin said that he doesn’t see it that way at all.

“… We do not believe that China is a threat to us. That’s one. China is a friendly nation. It has not declared us an enemy, as the United States has done.”

But referring to Putin’s interview, Nikolay Zlobin, the head of the Washington-based Center for National Interests, said during a broadcast on state television channel Russia 1, that constant repetition of the statement that Russia doesn’t have contracts with China, “brings doubt.”

At first glance, the union between Russia and China looks strong. Russia is supplying gas to China via the Power of Siberia pipeline, assisting Beijing in developing the country’s early warning system, and conducting regular military exercises with the People’s Liberation Army.

But according to recent media reports, there have been a few prominent cases of several Russian high-ranking scientists or officials being charged with spying for Chinа.

The most recent case concerned Valery Myitko, the President of the Arctic academy. The scientist is a prominent Arctic expert accused by Russian security officials of passing sensitive data to China. However, his defense team claimed that the information in question could be found in open sources.

The recent report by FAN news wire called China the most dangerous “partner” of Russia. “As soon as it becomes unprofitable for them, the Chinese will turn their backs and maybe even become our opponents. So far, there are no prerequisites for this, but in the future, who knows.”

“In general, while the dragon is full, he is kind and affectionate, but if he gets hungry, he can eat,” the report said.

Ironically enough, the FAN news wire is controlled by a Kremlin-connected businessman Yevgeny, labeled “Putin’s cook” by the Western media. Prigozhin, who initially provided catering services to the Kremlin, reportedly has ties with the Wagner Group, a private company that provides military services in various African states. A spokesperson for Prigozhin told The Bell Russian media outlet in 2019 that the businessman doesn’t have any connections to Wagner.

Africa is a continent where Russian and Chinese interests might clash in the near future, as both countries look to explore the rich local mineral base. But, while Russia declared the importance of the region after Putin hosted the African summit in 2019 in Sochi, it will be hard to match the Chinese position in the region. In 2019, China’s foreign direct investment in Africa totaled $110 billion.

“The Chinese activity in Africa often colludes with the Russian interests in Africa. But it is also known that the Chinese are not that popular there, as they bring their own workforce and don’t create new working places,” Gregory Vinnikov, a Russian-American television pundit and a regular political commentator, told The Epoch Times.

A Russian diplomat and a senior lawmaker familiar with the situation, who spoke to The Epoch Times on condition of anonymity, both confirmed that it is becoming more difficult to do business in Africa because of Chinese precedence.

Vinnikov, known for his anti-China stance, said he believes that the “rising of misunderstanding” between China and Russia might help the United States to “drive Russia away from China.”

“I assume that the United States can offer Russia more than the Chinese. China claims that it has technologies, but many of those technologies it steals from other countries, including the U.S.,” Vinnikov said.

There is a possibility that some of those sentiments might be shared even within the Kremlin. Moscow State Institute of International Relations (MGIMO) professor Andrei Bezrukov, a former illegal agent who was expelled from the U.S. in 2010, told Russia Chanel 1 show host Vladimir Soloviev that ”part of the Russian elite” doesn’t want to have a close relationship with China.

But Dmitry Kosyrev, a China expert who frequently pens columns on the China-Russia relationship, said that those views are ”marginal:” “Even if America wouldn’t exist we would get close with China. We are two states with a conservative view of the world. There are areas where we disagree, but our relationship is based on economic principles and will remain such in a foreseeable future.”

Dusya Parkova
Follow
Dusya Parkova has worked as a contributing writer and a journalist for various international media, covering the energy sector, business, and investments, with articles published in Oil and Gas Eurasia, The Moscow Times, Oilprice.com, and others. She holds an MBA in Management, has a business acumen, and extensive work experience in business administration and logistics.

Alexander Bratersky
Follow
Alexander Bratersky is the Russia correspondent at Defense News. He has covered U.S.–Russian relations, NATO and Middle Eastern affairs, and Russian policy in Syria. He previously worked at the Moscow Times and Izvestia as a political reporter, as well as RIA Novosti as a Washington correspondent. He also dabbles in stand-up comedy.
TOP NEWS