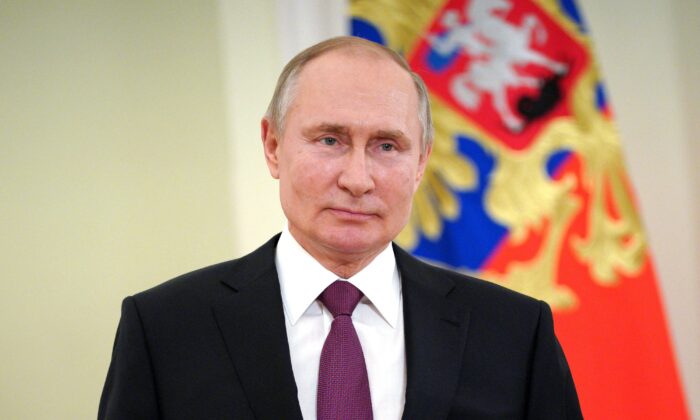 Russian President Vladimir Putin addresses on the occasion of the Day of the National Guard Troops, in Moscow, on March 27, 2021.(Photo by Mikhail Klimentyev/Sputnik/AFP via Getty Images)
WORLD

Moscow on Tuesday ordered its unvaccinated seniors and those with chronic illnesses to stay at home for four months as part of a wave of new restrictions aimed at curbing the spread of COVID-19.

Beginning on Oct. 25, those over 60 and those with chronic diseases who are unvaccinated in the Russian capital must remain at home until Feb. 25, 2022, Moscow Mayor Sergei Sobyanin announced.

The Moscow city government also instructed businesses to have at least 30 percent of staff work from home.

Dubbed a “home regime,” the mayor wrote on his website that it will not apply to those who have been infected with COVID-19 in the past six months, or those who are fully vaccinated. Those whom the order applies to must remain in their place of permanent residence, the mayor said.

Walks and outdoor exercise will be allowed, and those who are working will be entitled to sick leave. The mayor noted that the requirement does not apply to employees whose presence at work is “critical.”

The moves reflect a growing sense of urgency from the authorities as they confront fast-rising cases and widespread public reluctance to get injected with the Russian-made Sputnik V vaccine.”

The number of people hospitalized with a severe form of the disease is increasing every day, Sobyanin wrote.

“The most alarming thing is the situation with COVID infection among the older generation,” he added, saying over-60s accounted for 60 percent of patients, nearly 80 percent of people on ventilators, and 86 percent of deaths.

About 30 percent of the Russian population is fully vaccinated, despite the wide availability of the Sputnik V vaccine, which has even been exported for use in other countries.

On Wednesday, Russian President Vladimir Putin approved a proposal from the government to declare Oct. 30 to Nov. 7 non-working days across the country, as part of efforts to slow transmission of the virus.

“The epidemiological situation is developing differently in each region,” Putin said during a televised meeting with government officials. “In light of this, the heads of regions are given the right to impose additional measures.”

Putin said people would continue to receive salaries during those days. He also noted that the “non-working days” could begin earlier or be extended for certain regions.