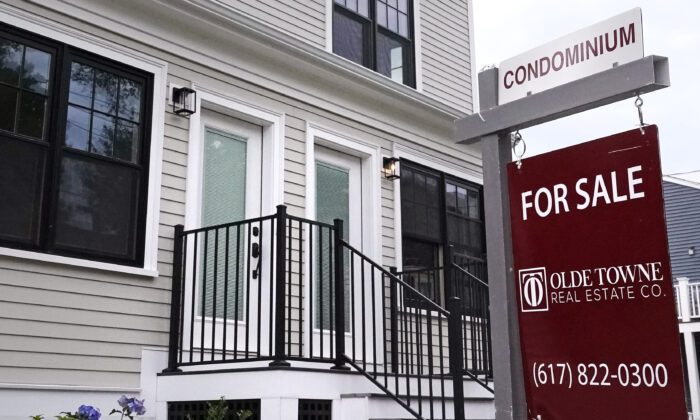 Condominium units are offered for sale in the Dorchester neighborhood in Boston on Aug. 18, 2021. (Charles Krupa/AP Photo)
Markets

Mortgage refinance demand dropped for the week ending April 8 according to the Mortgage Bankers Association (MBA), while it also expects refinance originations to drop by double digits in 2022.

“Mortgage rates across all loan types continued to move higher, with the 30-year fixed rate exceeding the 5-percent mark at 5.13 percent—the highest since November 2018. Refinance activity as a result declined to the slowest weekly pace since 2019,” Joel Kan, MBA’s associate vice president of Economic and Industry Forecasting, said in an April 13 press release.

Since mortgage rates have risen at a faster-than-expected pace, and considering the likelihood of the U.S. Federal Reserve taking more aggressive actions to control inflation, MBA now expects mortgage originations to total $2.58 trillion in 2022, which would be a 35.5 percent decline when compared to last year.

Refinance originations for the year are expected to be $841 billion, down 64 percent from 2021. Mortgage origination refers to the process that starts with a borrower applying for a home loan to finally getting keys to the property.

Mike Fratantoni, MBA’s senior vice president and chief economist, pointed out that the jump in mortgage rates will lead to a slowdown in the housing market and further reduce refinance activity for the remainder of the year. The share of refinance in total mortgage applications fell to 37.1 percent from 38.8 percent in the earlier week.

Meanwhile, mortgage applications for new home purchases fell by 5 percent in March 2022 when compared to the same month last year. But on a monthly basis, applications are up by 10 percent. According to Kan, this increase is “consistent with typical season trends” and is a signal that there is a strong demand for housing.

“Potential buyers have increasingly looked to new homes as an option, given the lack of existing homes for sale. The average loan size continued to set record highs and reached $436,151. Growth in applications for larger loans continued to dominate application activity,” Kan said in an April 14 MBA press release.

As the interest rates on fixed-rate mortgages keep increasing, customer interest in adjustable-rate mortgages (ARM) might start to rise, Irene Amato, CEO of A.S.A.P. Mortgage Corp. in New York and Florida, said in an interview with The Epoch Times.

“With an ARM, you can get a little bit of a discounted rate and then lock that in for 1, 5, or 10 years,” she said. “After that time, the rate can adjust—either higher or lower—and refinancing is always an option.”

Amato does not expect mortgage rates to go up to 7 or 8 percent and is instead betting on the rates to be around the mid-5 percent.