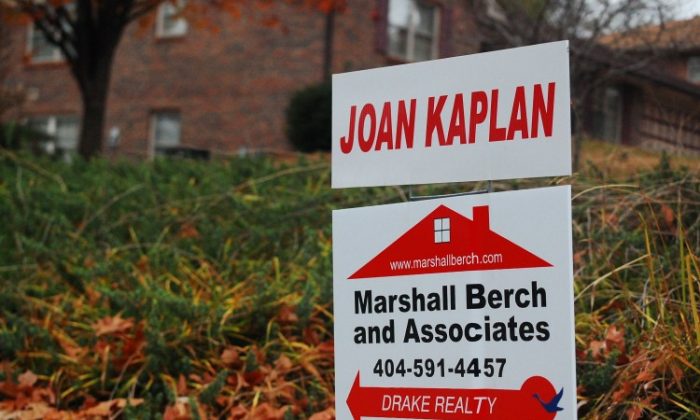 A for sale sign in Atlanta, Ga., on Nov. 27. The mortgage interest deduction costs the government about $100 billion each year, according to the Brookings Institution. (Mary Silver/The Epoch Times)
US

The home mortgage interest deduction (MID) is up for discussion as lawmakers consider how to rein in the federal deficit. Real estate business lobbyists are likely to oppose abolishing the tax break, yet now would be a good time to end it, according to some experts.

“At the end, the idea of this deduction was always to make it easier for people to buy homes,” said Dr. Andreas Rauterkus, assistant professor of accounting and finance in the School of Business at the University of Alabama Birmingham. If legislators change the policy, “generally it will make people buy more appropriate homes,” he said.

According to the Brookings Institution, the country foregoes about $100 billion per year in revenue through the deduction.

According to an article by Brookings Institution nonresident senior fellow Robert C. Pozen, there are two big myths about MID: it increases home ownership, and it primarily benefits the middle class.

Canada, Australia, and England, all similar to America in their legal and economic systems, have no mortgage interest deduction yet have higher rates of homeownership than the Unites States.

“Most European countries have no mortgage interest deduction,” said Rauterkus, a native of Germany. “That was very interesting to me [when I came to America] because I had never heard anything about it.”

He agrees with Brookings that MID disproportionately benefits higher income people. No one should take on a mortgage just for the tax break, but the larger the mortgage, the larger the deduction. The greatest deduction is gained in the early years of a loan, yet right now interest rates are so low that the tax break is also proportionately low, according to Rauterkus.

“The more taxes you pay, the more valuable the tax deduction. For smaller homes, it should not be as high,” he said.

Brookings recommended that at least the deduction for second homes should be ended, so that only a primary residence can be counted. Buying additional homes speculatively in order to sell them quickly was a big factor in the recent economic crisis, and ending the MID would discourage that.

The institution also proposed a cap on the amount of a deductible mortgage as well as stopping the policy of allowing deductions on home equity loans, which it said violates the intent of Congress not to allow deductions on consumer debt. Homeowners can use equity loans to buy cars or pay off credit card balances.

In places where housing stock is limited, the MID can inflate the price of houses, according to Brookings.

“That is certainly true,” said Rauterkus. “We always have to remember that the market recognizes the deduction, [and] the deduction is priced into houses.”

Although he recognizes that Congress has had trouble agreeing to any changes, “Right now is probably a better time than any to make a change. Right now the interest rate is as low as it has ever been, so the deduction is also low.”

According to Rauterkus, abolishing MID now, while prices and interest rates are low, would have the least effect on individuals or on the real estate market, compared to the effect it might have had when interest rates were two and three times what they are now.