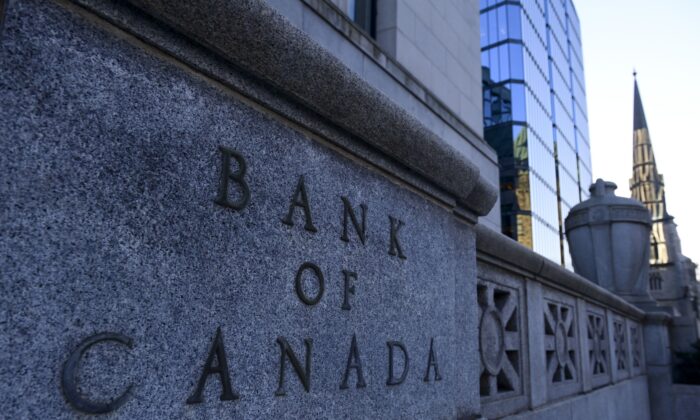 The Bank of Canada in Ottawa on Dec. 15, 2020. (The Canadian Press/Sean Kilpatrick)
Canada

Mortgage Debt Could Weigh Down Economy When Interest Rates Rise

Canada’s major banks, institutional investors, and homebuyers took on more risk than normal during a prolonged period of low interest rates, a distortion that may have a cruel correction as interest rates rise to curb inflation and some households struggle to handle higher servicing costs on their mortgages.

Respondents to the Bank of Canada’s recent Financial System Survey of 60 banks, pension funds, insurers, brokers, asset managers, and select others indicated that the period of low interest rates over the past decade made them less safe in their pursuit of financial returns.

“Overall, most respondents stated that they are more exposed to risky assets, yet they believe that their level of risk has not changed significantly. Combined with their high level of confidence in the financial system, attributed in part to the pandemic response of authorities, this may suggest moral hazard,” the report warned.

Investopedia.com defines moral hazard as “an idea that a party protected from risk in some way will act differently than if they didn’t have that protection. … Moral hazards can be found everywhere. They occur when people and companies take risks knowing they’ll be bailed out by another party in the end.”

Livio Di Matteo, an economics professor at Lakehead University, doubts Canadians have ignored risk as much as they have embraced reward.

“Moral hazard is when an entity does not bear the full cost of its actions. In the case of investors, I am not sure they are pursuing riskier investments because they think they are going to be bailed out. I think they are pursuing riskier investments because that is where the return is perceived to be higher and that is in many respects a function of lower interest rates, which have created the incentive to take on more risk,” Di Matteo told The Epoch Times.

Homeowners have taken on substantial risks. According to the Bank of Canada, outstanding mortgage debt-to-GDP ratios have risen from about 0.5 percent in the year 2000 to more than 7 percent today. The burden of mortgage payments has remained stable relative to earnings because interest rates have been so low, but that is expected to change.

Inflation in Canada rose to 4.7 percent in October, its highest level since February 2003. The central bank is expected to raise interest rates in 2022 in response, but how drastically and for how long is not known.

“I think it is unlikely that the Bank of Canada will act more aggressively than has been suggested to date,” Di Matteo said.

“Rate[s] will rise, but it will most likely be in a measured and gradual fashion. That being said, given current debt loads, even small increases will represent substantial increases in payments for some mortgaged homeowners.”

Prior to the 2007–2008 financial crisis, the U.S. Federal Reserve increased interest rates, housing supply outpaced demand, and home prices fell. Homeowners were stuck with payments they couldn’t make and homes they couldn’t sell. In a sweeping government intervention, the U.S. Federal Housing Finance Agency placed under its conservatorship Fannie Mae and Freddy Mac, two publicly traded government-sponsored mortgage insurance companies that together had most of the market.

“Under what circumstances would the taxpayer have to step in and bail out somebody, whether it’s the CMHC [Canada Mortgage and Housing Corporation] or the banks? Well, there’s my perhaps false optimism coming out again, I just find it hard to imagine a situation where that would happen,” Ambler said in an interview.

Ambler says the high mortgage debt levels in many Canadian households have both good and bad sides.

“They’re more indebted, but on the other side of their balance sheets, on average, they have more assets. So is there going to be a financial crisis? I think it’s more a question of can people easily face their monthly payments without getting into trouble,” Ambler said.

“If interest rates suddenly go up, that could be a big problem. That’s the kind of thing which gives you a financial crisis. It’s a fire sale—people have to liquidate assets suddenly.”

In a Nov. 23 speech to the Ontario Securities Commission, Bank of Canada deputy governor Paul Beaudry had similar warnings.

“High debt levels mean the economy could react particularly badly to certain types of shocks, especially ones that affect income and house prices or cause interest rates to rise substantially,” he said.

“Interest rates can be expected to rise” as the effects of the pandemic recede, Beaudry said.

“[T]he risks that we see could spur significant financial stress or losses for many households and businesses. As such, they could challenge the economic recovery from the pandemic or create problems for the economy down the road.”