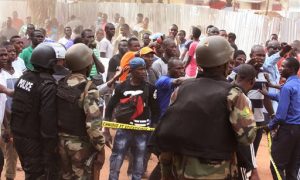 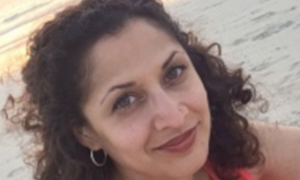 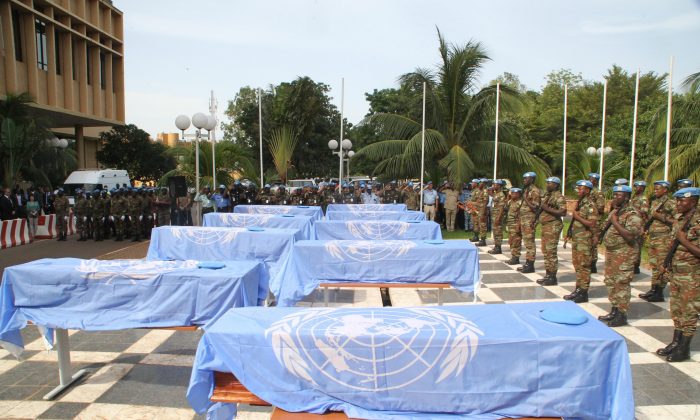 The coffins of nine UN soldiers are draped with U.N. flags during a service at the headquarters of MINUSMA, the U.N. mission in Mali on Oct. 7, 2014, in Bamako. The soldiers, all from Niger, were on a supply run in the north-eastern desert on Oct. 3, when they were targeted by armed men on motorbikes. (Habibou Kouyate/AFP/Getty Images)
Africa

Mortar Attack on UN Base in North Mali Kills 3, Injures 20

DAKAR, Senegal—Mortars lit up the dawn sky when they were fired on a United Nations base in the northern Mali city of Kidal early Saturday, killing at least three people.

The attack came eight days after Islamic extremists attacked a luxury hotel further south in the capital, Bamako, in which 20 people were killed.

Two U.N. peacekeepers and a contractor were killed in the Saturday assault in Kidal that also injured 20 people, leaving four in serious condition, said Olivier Salgado, spokesman for the U.N. mission in Mali.

Guinea’s Ministry of Defense said two of its soldiers were killed.

A Kidal resident said about six shells were fired by attackers at dawn.

“The earth vibrated then I saw two flares in the air and then another one burst, which gave me the impression of being a response by the U.N.,” said Assarid Ag Cheick.

No group claimed responsibility for the attack in the country’s restless north but Islamic extremists are suspected.

“I want to reiterate that these attacks will not impede the determination of the United Nations to support the Malian people and the peace process,” said Mongi Hamdi, the head of the U.N. mission. “I express my solidarity and salute the brave men and women serving (the U.N. mission) throughout the country for their efforts to bringing lasting peace to Mali in these difficult conditions.”

Northern Mali has been unstable since it fell to Tuareg separatists and then Islamic extremists following a military coup in 2012. Separatists, militia groups and the government signed a peace deal in June.

In 2013, the French pushed Islamic militants out of Mali’s northern cities and towns, but jihadists continue to carry out attacks, often targeting U.N. peacekeepers.

Extremists extended their reach further south this year, including an assault on a Bamako restaurant and bar popular with foreigners in March that killed five people and another on a hotel in Mali’s central Sevare town in August that killed 13. Islamic extremist group Al-Mourabitoun claimed responsibility for both attacks.

The group has said it worked with al-Qaida in the Islamic Maghreb on the Nov. 20 assault on the Radisson Blu hotel in Bamako. However, responsibility for the attack was also claimed by other militant groups.

Malian authorities have said they arrested two men over the violence.