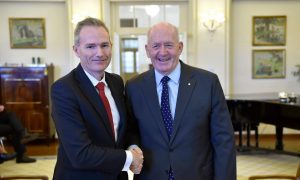 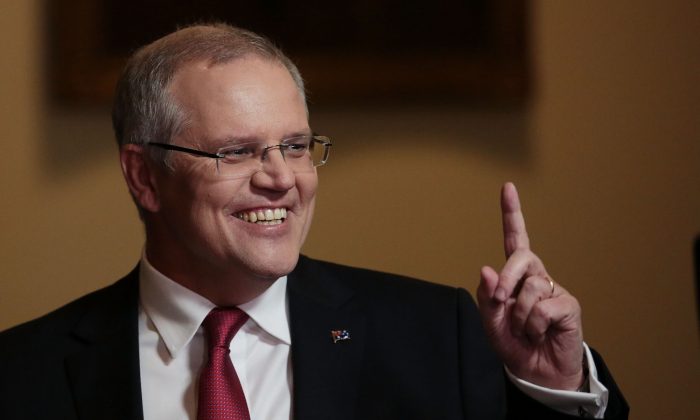 Scott Morrison speaks with comedian Peter Helliar in the budget lockup at Parliament House in Canberra, Australia on May 9, 2017. (Stefan Postles/Getty Images)
Australia

Scott Morrison has ramped up his rhetoric about the economy plunging into recession under a Labor government.

Labor dismissed his revived warnings of an economic downturn as “desperate and dishonest,” but the prime minister said it was “the truth” to inform voters ahead of the next federal election.

Morrison raised the specter of a recession at a business summit in Sydney on Mar. 5.

Our Government has a strong record, clear beliefs and a comprehensive plan to keep our economy strong, keep Australians safe, and keep Australians together. We want you to keep more of what you earn. We don’t believe you should have to pull some people down to raise others up. pic.twitter.com/2Y8Y7khCst

“I’m saying the economy will be weaker under Labor—that’s exactly what I’m saying,” he told attendees.

“They’re going to put $200 billion worth of taxes and take Australia’s industrial relations system back to the times when we had recessions in this country.”

Asked directly whether he believed Australia could plunge into recession under Labor, Morrison said: “Whether it goes to the extent that you’ve said, well, history would show.”

“I’m trying to ensure that we never know the answer to that question,” he added.

Pressed on whether he was being alarmist by raising the prospect of a recession, the prime minister said: “I think it’s the truth.”

“It’s everything we’ve come to expect from a desperate prime minister with no economic policy of his own.”

The prime minister was later asked to clarify whether he was suggesting Labor would drive the economy into recession.

He initially said “I can’t predict how bad things would get under Labor” but soon sharpened his language.

“Whether that could extend to those types of outcomes (recessions), that will be more likely under Labor than it would be under a coalition government,” he told reporters in Canberra.

Morrison has also quashed any hope of delivering tax cuts for big businesses, which the government abandoned late last year.

“I can’t see the opportunity for that in the near term or at any point at this stage,” he told the business summit.

“We took that to the Australian people at the last election, we were returned, and the Labor Party and the Senate voted against it and so that is not something I’m taking to the next election.”

During his speech, the prime minister lamented Labor’s plans to ditch some of the coalition’s planned tax cuts and argued Opposition Leader Bill Shorten would unwind the nation’s industrial relations system.

“The contrast at this election between the economic plans of the coalition and Labor is greater than it has been for 40 years,” he said.

“A Shorten Labor government would not be a slightly more progressive version of the coalition government. It would be an economic leap in the dark.”

“Any budget handed down in less than four weeks’ time that doesn’t deal with the anxiety that permeates our suburbs isn’t worth the paper it’s written on,” Chalmers told the Committee for Melbourne.