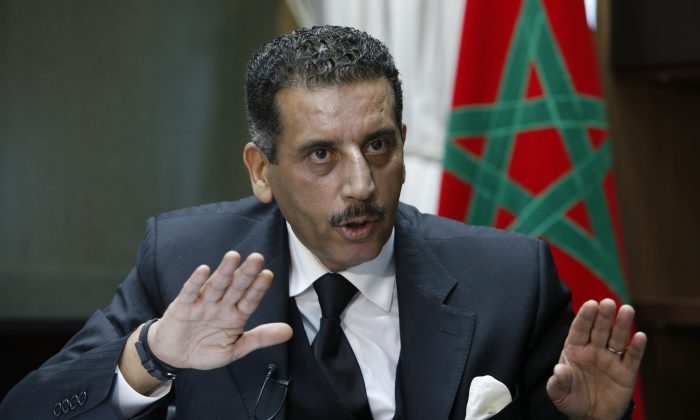 The director of the Central Bureau of Judicial Investigations, Abdelhak Khiame, gestures during an interview with The Associated Press at his headquarters in Sale near Rabat, Morocco, on Jan. 5, 2016. Khiame says it was his country that put French and Belgian police on the trail of the network behind the Paris attacks that killed 130, and likely spared more lives by pinpointing the location of the man considered the main organizer, holed up outside the French capital. (AP Photo/Abdeljalil Bounhar)
International

SALE, Morocco—A top Moroccan intelligence official said on Tuesday that it was his country that put French and Belgian police on the trail of the network behind the November attacks in Paris that killed 130, and likely spared more lives by pinpointing the location of the suspected ringleader.

The director of the Central Bureau of Judicial Investigations, Abdelhak Khiame, said in an interview with The Associated Press that “this intelligence precisely allowed France to avoid more severe attacks that were planned.”

European investigators are trying to piece together the geography of the Nov. 13 attacks, focusing attention not only on Paris and Brussels—where some of the attackers lived—but on other parts of Europe as well as the trail of some to Syria. The Islamic State (ISIS) extremist group claimed responsibility for the attacks on restaurants, cafes, a noted music hall and the sports stadium.

France’s interior minister had said that a non-European country led the French to suspected ringleader Abdelhamid Abaaoud, who was killed five days after the carnage in a raid in the Paris suburb of Saint-Denis.

Abaaoud was among the attackers who lived in Molenbeek, a Brussels neighborhood that is home to numerous Belgians of Moroccan descent. Khiame claimed that Moroccan intelligence quickly pointed police to Molenbeek.

“After the attacks that took place in Paris, Morocco communicated that they (the attackers) were connected to a Belgian affiliate in Molenbeek,” Khiame said. “It was true because afterwards, thanks to the intelligence that we had, we were able to communicate to France that the mastermind of this group … Abdelhamid Abaaoud, was still in Paris at Saint-Denis.”

The official confirmed reports that Abaaoud’s brother, Yassine, was arrested Oct. 10 in Morocco while on a family visit as a preventive measure, because he “belongs to a family (involved) in terrorism.”

In Belgian District, Many Feel a Dead End Fuels Militancy

Abdelhamid Abaaoud was sentenced in absentia last year—before the Paris attacks—to 20 years in prison for serving as an ISIS recruiter and kidnapping his brother Younes, then 13, to join him in ISIS-controlled territory. Khiame described Younes as having a leadership role today.

Yassine, meanwhile, is still being held, but Khiame said he has not provided information about his now-deceased brother Abdelhamid that would shed any light on the Paris attacks.

Morocco, a Muslim kingdom that is a major U.S. ally and bulwark of stability in North Africa, shares intelligence on potential extremists with Western allies and across the Arab world, from Libya to Egypt, Saudi Arabia, and the United Arab Emirates, Khiame said.

“Morocco is in a war with terrorism,” he said.

Khiame pointed to Morocco’s role in the U.S.-led coalition following the Sept. 11 attacks in 2001 as a turning point that increasingly made Morocco a target for terror.

The 2003 Casablanca attacks “gave us a lesson,” he said. A string of suicide bombings in Casablanca that were blamed on an al-Qaida linked Moroccan group killed 33 people.

In 2011, a blast at a cafe in Marrakech killed 17 people, mainly tourists. But there has been no major terror attack since.

Special measures mean Morocco can make preventative arrests, like that of Yassine Abaaoud, allowing officials to sift through individuals who may have terror connections. If they do, the courts take over, he said.

Up to 1,500 Moroccans have gone to Syria to join the Islamic State group. It was not known how many have returned, but Khiame made clear that they are being watched.

Arrests of potential suspects and other such measures fit into Morocco’s broader counterterror policy, which Khaime described as anticipatory.

“We don’t wait for individuals to carry out the attacks … We need to act before we react,” Khiame said.

Since the creation last March of his investigation bureau—dubbed Morocco’s FBI—22 terror cells “on the verge of committing acts” have been dismantled, he said. In the run-up to New Year’s Eve, 17 “radicalized” individuals were arrested around Morocco.

Morocco, like numerous other countries, had a case of the jitters ahead of New Year’s Eve, fearing an attack.

The country remains on high alert although there is “no imminent danger,” he said.