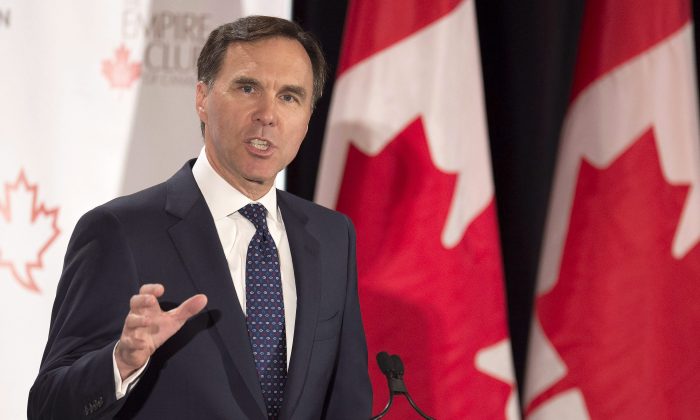 Finance Minister Bill Morneau addresses The Canadian Club of Toronto and The Empire Club regarding Budget 2017 in Toronto on March 24, 2017. (The Canadian Press/Frank Gunn)
Canada

Morneau to Tout Canada-US Trade to US Governors and Mayors

CALGARY—Canada’s finance minister says he intends to head south of the border next week to reinforce the importance of Canada-U.S. trade.

“Our approach was to be deeply engaged with the new administration from Day 1 … I’ve been there three times this month,” Bill Morneau told a question-and-answer session following a speech about the federal budget to the Calgary Chamber of Commerce on March 27.

“This is an ongoing effort for us to make sure the Americans we’re working with really understand the benefits of dealing with Canada.”

Morneau, who spent time with U.S. Treasury Secretary Steven Mnuchin last weekend, said the next round of meetings won’t be with the powerbrokers in Washington, D.C.

“When you go state by state, you find that there’s a very positive response from the states who understand how important Canada is to the United States … to the employment of American workers.”

Morneau joked with the audience that the one question he has heard from individuals as he has travelled across the country is what Donald Trump is like. He noted TransCanada Corp. CEO Russ Girling was at the head table.

“I don’t have to answer it because Russ is here and he met with him last week. He’s got more recent experience.”

This is an ongoing effort for us to make sure the Americans we’re working with really understand the benefits of dealing with Canada.
— Finance Minister BIll Morneau

Morneau spent most of his speech touting his recent budget. He acknowledged that things have been tough in Alberta.

“I know that Albertans, perhaps more than anybody in Canada, fully understand these challenges. I know that the drop in global oil prices, now more than two years old, was a precursor to some real challenges,” he said.

“There’s emerging evidence that the worst effects of the oil shock are fading. Employment in this province has increased by 20,000 since July 2016. We’ve seen since we came into office a reduction in unemployment from 7.1 per cent down to 6.6 percent.

“I recognize that despite some hopeful signs, families are still anxious. And we know that we can do more.”