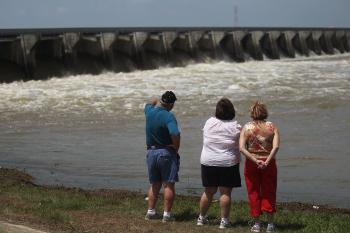 People look on as water from the rising Mississippi River is released through the Bonnet Carre Spillway May 9 in Norco, Louisiana. (Mario Tama/Getty Images)
US

Morganza Spillway to Open on Saturday

Christina Zhang
View profile
Follow
biggersmaller
Print
The U.S. Army Corps of Engineers is expecting to open the Morganza Spillway in Louisiana on Saturday, diverting water from the flooded Mississippi River to the Atchafalaya River Basin.

The Morganza Spillway is part of the Morganza Floodway system, built by the Corps to relieve excess water in the Mississippi River.

The spillway will start opening as soon as the Mississippi River flow reaches 1.5 million cubic feet per second at Red River Landing, Louisiana, said the Corps in a statement. The spillway will be gradually opened to prevent an immediate rush of water.

Recent epic water levels in the Mississippi caused by torrents of spring rain and substantial snow melt have spurred the Corps to release maps that indicate the flooding of major cities such as New Orleans and Baton Rouge if the spillway isn’t opened, reported Reuters.

These major cities will be saved at the cost of farmland and small towns in the Atchafalaya Basin, where the diverted waters could cause flooding to reach 20 feet, according to Reuters. Residents have been warned to evacuate, and to take their livestock with them.

If the spillway isn't opened, flooding could also affect oil refineries near the lower Mississippi River, which accounts for about 12 percent of the nation's gasoline and fuel production.